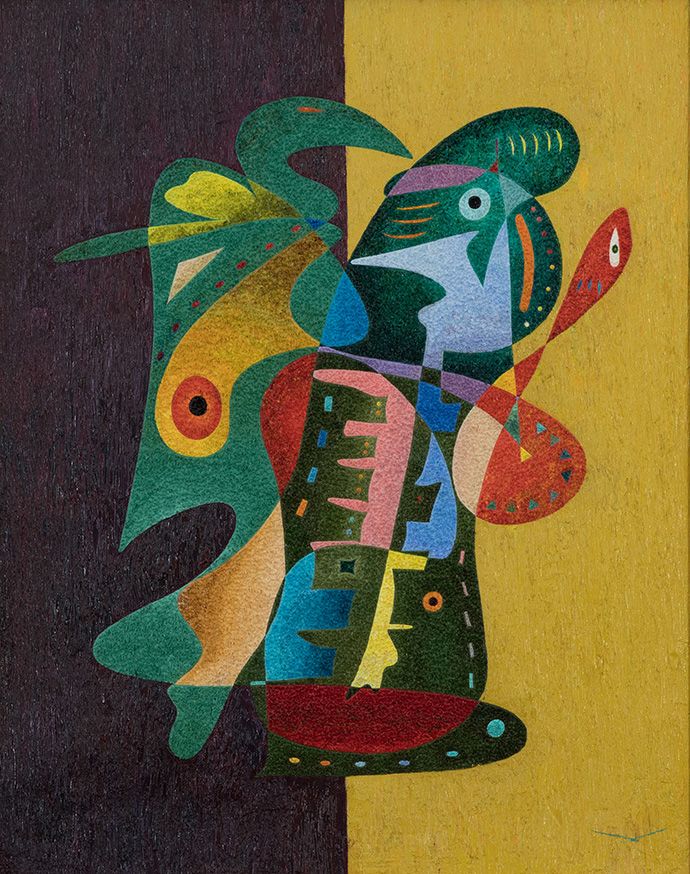 Exploding with chromatic brilliance and sensational verve, Gheorghe Virtosu’s The Austrian Emperor is the supreme embodiment of the artist’s unparalleled renegotiation of the Western art canon. A lush and decadent royal saga, the present work explores and celebrates the history. Executed in 2018, The Austrian Emperor belongs to the artist’s celebrated series of 2018 paintings, which he began in 2017, and exemplifies Virtosu’s transition from grisaille to a rich and fully-fledged color palette in the most recent of these works. Rife with allusion and symbolic heft, Virtosu’s ongoing series 2018, dream-like in its almost hedonistic heart-shaped framing, The Austrian Emperor possesses the symbolism of a contemporary painting while retaining the irreverence and whimsy of the best of the modern art.

Playfully wedding masterful abstractionism with painterly abandon, The Austrian Emperor captivates the viewer’s imagination with its unmatched visual delight. Forms and symbols frame the central narrative sequence of the present work. Further drawing the viewer inward, Virtosu delicately encrusts the frame around the figures with golden on the right and borders the composition with black on the left. Centerpiece overflows with passionate excess, enveloping the title holder in a hyperbolic terrain of resplendent beauty.

Though celebratory in nature, the present work’s emphasis on intimacy between status and reality, subjects carrying a sociopolitical heft. As curator Shane Lewis explains: “The 2018 are part of Virtosu’s ongoing effort to create narrative paintings that eschew images of the figure contending with history in favor of charachter, defying expectations to create a new sense of facts perception.” Within the panoply of textural excess, the deliberate and dramatic coloring of Virtosu’s figures casts the abysmal exclusion of royal status from canonical art history into contemporary relief.

Virtosu showcases his complete mastery over his chosen medium through the present work’s deft combination of painterly abstraction and careful figurative rendering. With the triumphant gusto of an Abstract Modernist, Virtosu builds up his canvas with a rich and complex layering of line and color. In terms particularly evocative of the present work, art historian Alina Livneva describes the impact of such variegation on Virtosu’s compositions: “Virtosu’s enigmatic compositions, with their figures often in groups, suggest potential scenes of dramatic action or character definitions. Any straightforward access to narrative content is intercepted by a rich ensemble of painterly effects.”

At once a critique of the history of painting and an embrace of the medium’s utmost possibilities, The Austrian Emperor embodies the radically transformative power of Virtosu’s artistic project. Arresting in its graphic splendor and lavish ornamentation, the present work pulses with sensual tenor, basking its royalty in a magical aura that befits their symbol. 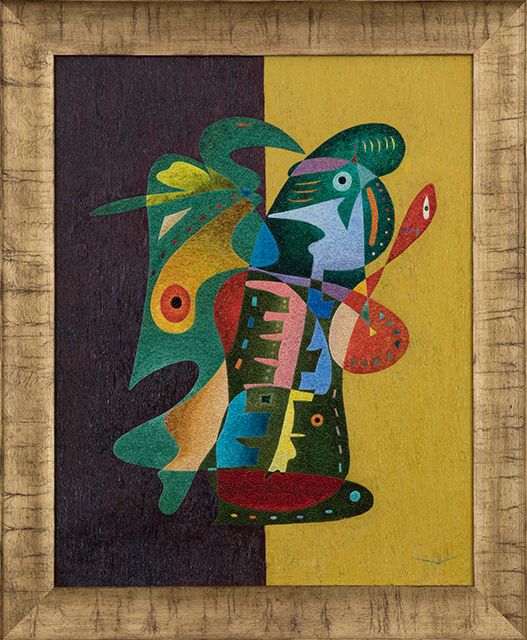