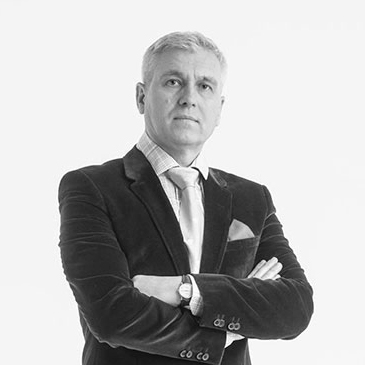 'The mind-blowing riches of an exhilarated imagination.' The Times 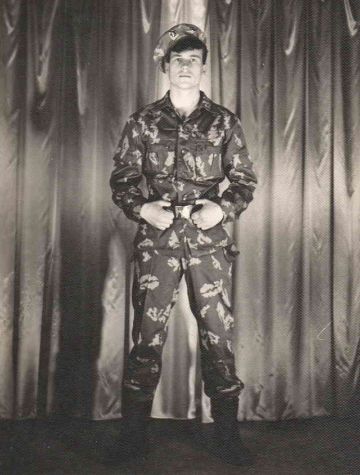 "My mother said that if I wanted to be an artist, I would be successful. That was the hardest thing of all for me as the urge for art creation were born while I was in prison. My mother died, and I had no real chance to pay last tribute. At that time, it was not about finding my style or make it in the art world; it was about setting me free and what I had to say.” - G. Virtosu.

Gheorghe Virtosu ’s way of being in the world combines to perfection a straightforward and down-to-earth nature with a mystical and mysterious streak. The passionate nature has always urged him to follow intellectual and deeply spiritual pursuits, and therefore becoming a children’s author has fulfilled a heartfelt personal need, while at the same time mastering large scale art projects. From the very beginning, his creation has eluded all canonization, contemporary and classical, since it cannot be labelled as belonging to any of them for definite.

The contemporary artist was born on April the 14th 1968, in a small village in Basarabia, within a loving family. When he was only 15 years of age, he decided to leave home and continue his education at a town college a few good miles away from home. In doing so, he came against many adversities, while having to comply with a rigorous discipline imposed by the school, mostly through a very active and physically demanding sportive schedule. In the end, however, the active sporty lifestyle he led in college served him in good credit for the compulsory military service which followed soon after graduation.

Having envisaged a military career for himself, he ended up as a resilient character ready to tackle head-on any other challenges which life might have thrown at him. After the fall of the Communist system in USSR, Gheorghe resigned from the army and went abroad in search of a new life, like most of the young people of Easter-European background.

After having travelled the world far and wide, thus achieving one of his childhood dreams rendered as impossible for anyone growing up behind the Iron Curtain, the artist eventually chose Britain as his adoptive country, settling down in London and acquired British citizenship after a few years.

In 2004, the artist was detained by the French authorities. At the end of a long and costly investigation, he was accused of having created one of the greatest networks of immigration in Europe since The Great War.

Born under the bold sign of Aries, the artist is hardly a man to be kept down by any circumstances. Although deprived of his freedom of movement, his mind and spirit soared up to heights of creative power never reached before. As a result of his confinement in isolation, Virtosu came up with two novels. After a period of intense creative strain, he found himself at his wits’ end, experiencing mental and physical fatigue. In the remaining time of his incarceration, he kept on sketching ideas and characters which would, later on, come to life in his oil paintings. 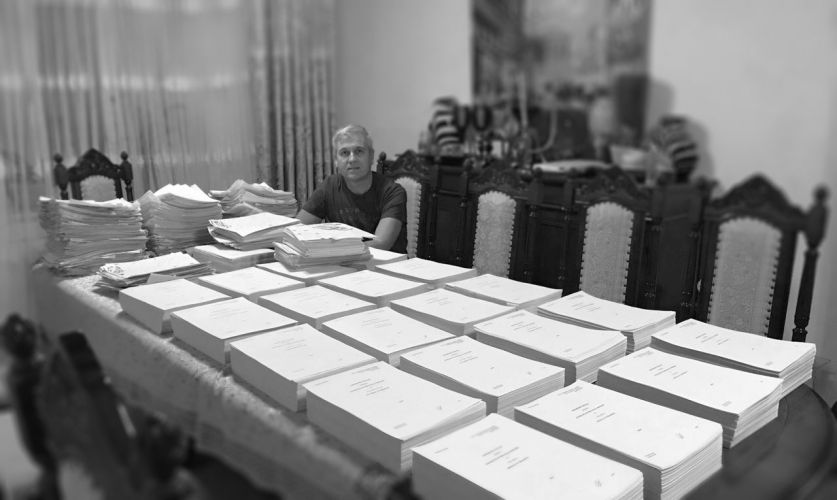 Gheorghe Virtosu the writer. "The Ignorance in the arms of mankind"To be published in 2020. New York.
As we can see, abstract paintings have become chosen ways of rebelling against the miscarriage of justice occurring in the world. Writing and painting have become the most effective way of dealing with frustration, loss, and anger - a form of therapy. Virtosu has found in art the ideal form of elevating negative emotions and transforming them into rewarding projects meant to spread and replenish happiness and a zest for life.

Engaging with all kind of challenges at different levels, he not only maintained his integrity of spirit but also added value to his art and gained new perspectives, like a beautiful diamond which, skilfully cut, reflects the light in unexpected ways.
'A visionary artist and thinker.'
TimeOut
'Be drawn into a weird and wonderful fantasy universe.'
Evening Standard
'A revelation.'
The Guardian


While his cutting-edge literary style asserts itself as refreshingly unique, Gheorghe Virtosu surprises us, yet again, with his found taste for abstract paintings which approaches themes and topics from different cultures, thus introducing a diverse view of the world. Each artwork is singular and carries a genuine complexity of meaning which requires its code for deciphering it.

Ranging from gritty and brush, to poetical and ethereal, the characters in Virtosu 's artwork are free spirits of nature caught in a game of multiculturalism and plural voices which join in together to produce divine harmonies of colour and meaning. The contemporary British abstract artist's pieces are like nothing we have seen before: dressed up in hooded cloaks, equipped with weapons which look like magical devices and displaying a puzzling other-worldly demeanour, the characters tell us nothing about themselves, and everything about the universe they belong to. His works are very sparing with whom they are letting in: unequivocally, they invite the audience to engage with art at more than one level actively and lead the way to first-hand experiencing aesthetic knowledge, sensorial and intuitive perception.

Art is an effort to fill an empty space with the expression of an idea. Work is born through the artist as the medium, melding order out of a diverse landscape in an intellectual exercise. Freedom from boundaries opens possibility in the form of the medium and the breadth of the artist to reveal wholly new ways of seeing. The truth in the revelation creates an opportunity to shape the colours of paint in an exercise that is not only the experience of art but life.

Confident art is large and encompassing, bold and insistent on the attention of the viewer while encouraging interpretation and participation in the experience of the work. The viewer engages the work as a partner to the artist and initiates a journey that shares in the evolution of its meaning. Envisioning and capturing work on canvas is not where it lies dormant and static: it is a place where the expression becomes a community and continues to expand.

In this natural form, art can only exist if it is authentic. The part of the artist is the effort to engage organic expression in a way that has not been previously achieved. Life does not just simply spill onto the canvas like blood let from veins. Randomly bleeding onto a canvas is too easy, distasteful, and ultimately disappointing. The challenge of this art is to evolve an expansive landscape that brings the viewer, idea, artist, and experience together. At once, it is chaos and at the same time, a simple embrace of the loss of boundaries at the portal to new understanding. 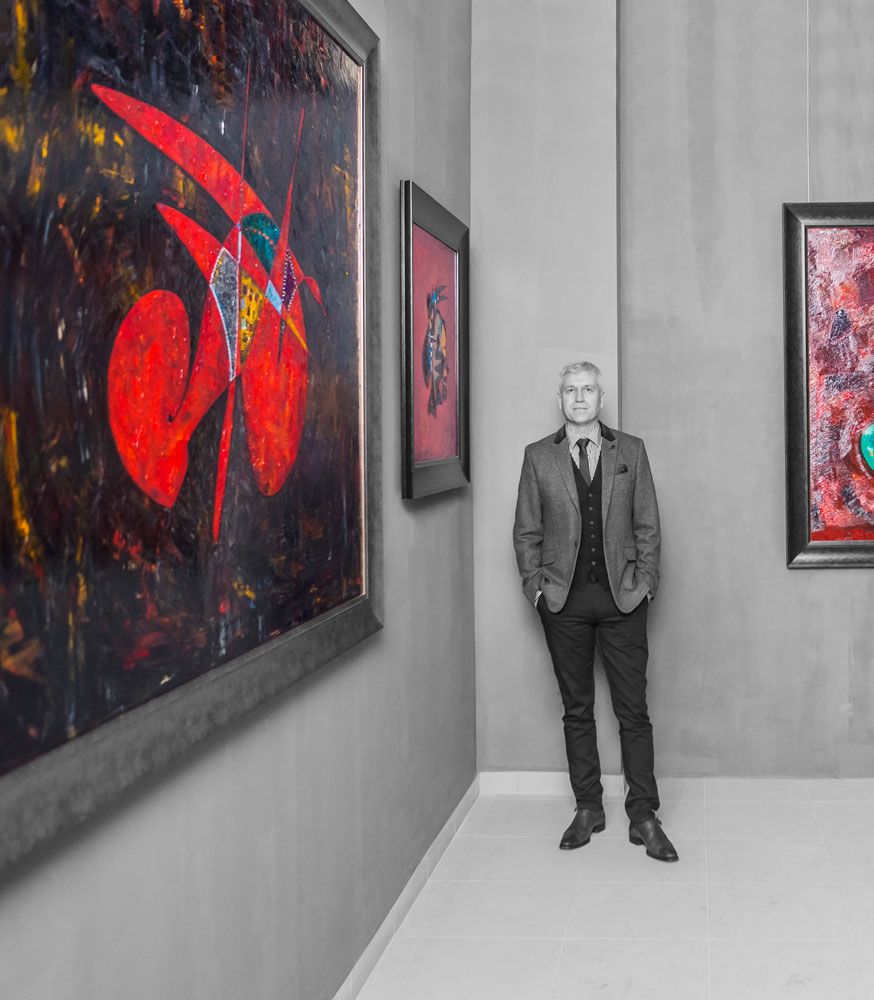 For Buyers
About Us
Virtosu Art Gallery
For Artists
Top Categories