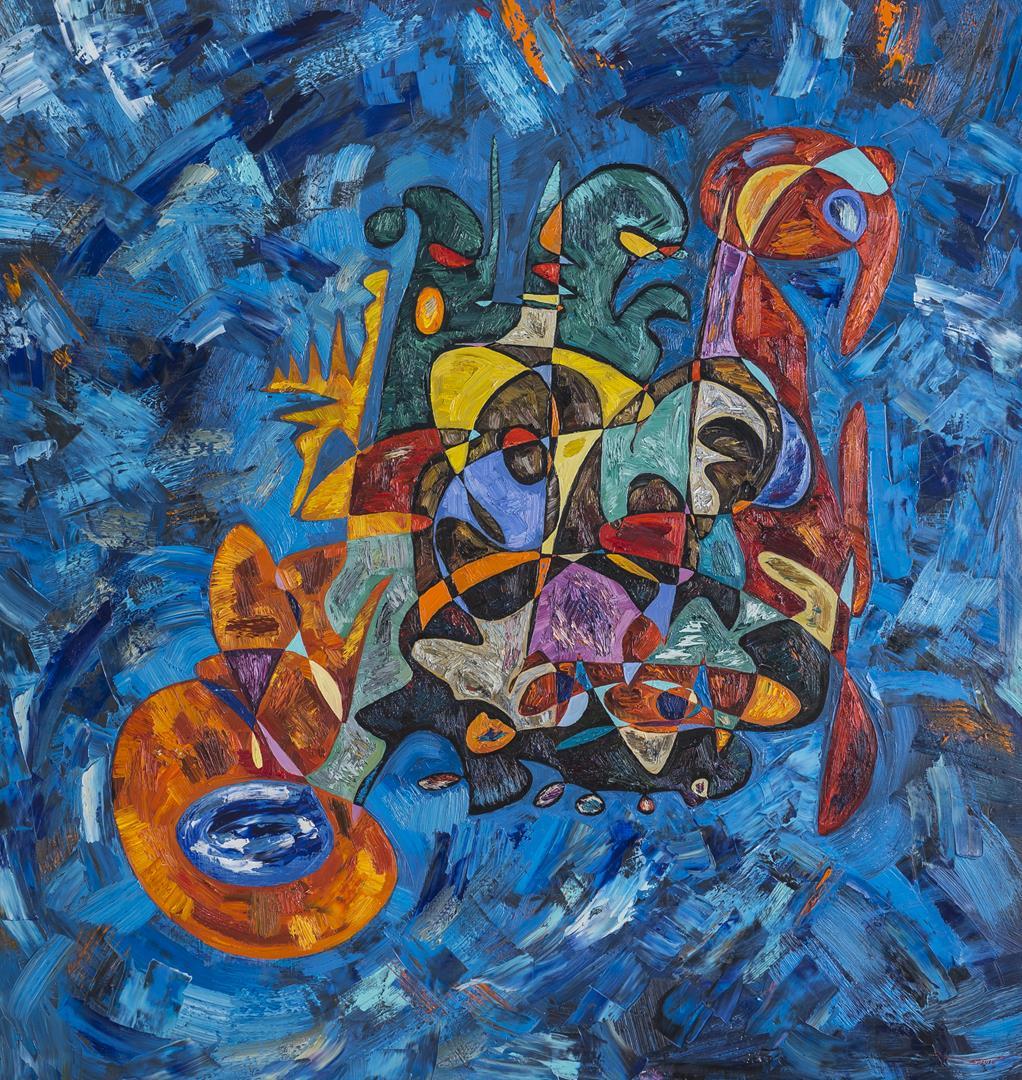 Among modern artists with no classical training, the paintings of Virtosu, like Van Gogh and Gauguin stand out as having exceptionally strong and confident lines. Virtosu's confidence is a feeling of self-assurance that is grounded in an authentic experience of our own ability, perspective and sufficiency. Skilfull use of color acts as a emotion stimulus, leading the viewer to a figure or scene, and add depth to the semi-abstract work.

The Three Bogatyrs is an important part of Russia’s folklore and was also published in four books. Viewers have long lauded Vasnetsov’s painting of the Bogatyrs. As the latter belonged to the realist school, there are no grounds for comparing it to Virtosu’s painting as he is of the Impressionist school.

The painting is a wonderful burst of bold colors, with brushstrokes ranging from the fine and light to the heavy and strong. The foreground is dominated by varying shades of blue and, unless white/light breaks through the blue, the shades tend towards the dark, such as that which one finds in the sea or the color of the day when sunset begins to approach. The richness of Virtosu’s canvas is distinguished by the remarkable range and quality of the gestures that the artist arranges across its textured surface. The blue is sometimes circular, other times it is heading upwards or downwards. The strong brush strokes allow us to see the movement and changeability of the blue background.

The centerpiece, supposedly, depicts the three bogatyrs of Russian legend, folklore and history. They are colorful, one after the other. The first id orange with a trunk, as opposed to a nose, the third is green and the mouth seems to open up, not from the face but from the chin, giving it an extremely large bit. The last is a darker shade of green, with a red line, supposedly in place of the mouth, an egg-shaped orange yellow mark. This figure is either not as remarkable as the other two and is to the far end of the rich, varied and multicolored grounding they are one. Instead, the third figure seems to have its own ground, flowing directly from him, or towards him. It is a patterned orange shape with blue in the middle. The blue seems to be a pond or an empty space in the patterned orange, allowing the blue of the background to shine through. The Three Bogatyrs is a delightful painting which adorns its canvas with beauty and joy.

The synthesis of these pictorial strategies is effective as Symbolism, the transmutation of an idea or a story into a heightened, visionary, and revelatory state. Art that aims for verisimilitude (accuracy and truthfulness) of the highest degree is likely to be exceedingly elusive. A contextual analysis, however, often brings additional information to light allowing a deeper appreciation beyond the formal (visual) aspects alone. The picture unites many of the elements essential to a grand and powerful interpretation of one of those historical elements in which Nature sometimes indulges. Art comes from within Virtosu, and it is expressed in the external world for the entertainment of the viewer. Everyone will appreciate a Virtosu's piece because it speaks to each individual in unique ways—therein lies the criticism of subjectivity.