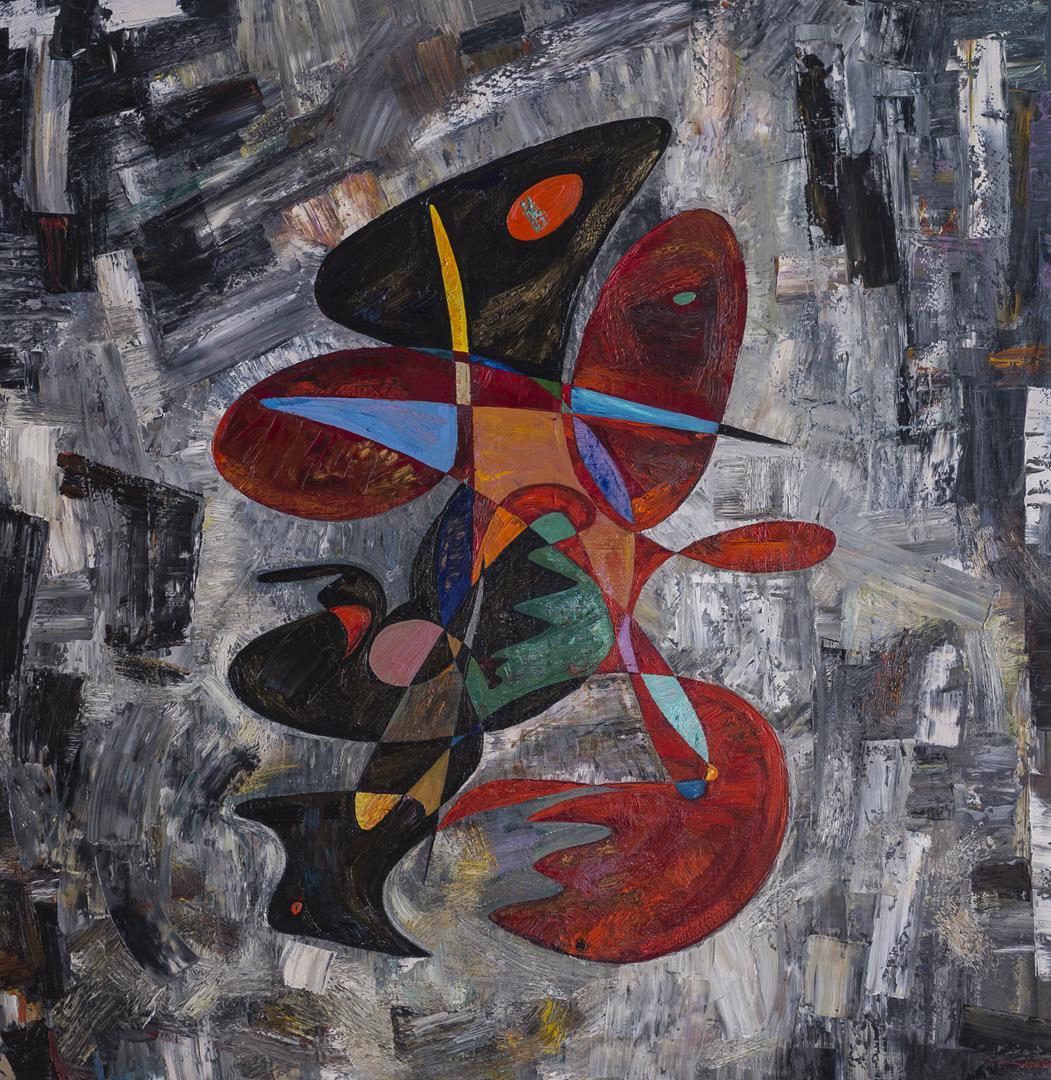 The artist has provided in his abstract painting a conspectus of the vision of the regiment through a visual duality. The hat alone, either a bicorne or a bearskin at an angle, points us to both the historical and the present.

The bicorne directs us to consider the distant past and the foundation of the regiment. The bearskin allows us to think of the regiment in its present form and the award of its colors by Queen Elizabeth II in 2012. This view of the present in this painting naturally invites to see the divergence of roles fulfilled by the regiment throughout its history.

Virtosu depicts his figure wielding at an engaging diagonal in blue, perhaps a bayonet to signify a long military record. However, in contrast to this angle is another that is perpendicular, which refers to the ceremonial role of the Royal Guard that undertakes these duties at the royal palaces of London and Windsor. This perpendicular angle held tightly to our figure's trunk is a metonym for the stolidness and impassivity of the soldiers of the guard in this guise.

Virtosu also juxtaposes movement and stasis as a further polarity within this divergence between military engagement and ceremonial duty.

The legs of the figure appear to charge and create a dynamic diagonal in the body which, combined with the diagonal of the bayonet, effects a posture of warring action.

The use of oil colors also permits a fluid sense of space, apparent in Virtosu’s handling of the background, against which the firmly contoured and volumetrically shaded figure, brimming with blossoms, appears to hover weightlessly as if in timeless space.

The dualities played with in this contemporary oil painting are also particularly apposite given that the origins of the regiment were as part of an anti-royalist army and its subsequent declaration for the restored Charles II in 1660, with its consistent maintenance by succeeding monarchs until the present day, marked a break with its own past.

Virtosu’s use of black, white and red, blended to create an intermediate warm tonality, is Symbolist in effect, contrasting the artist’s motifs against the environment conceived, as an expression of a mood or a poetic, metaphysical state of mind the artist wished to communicate to the viewer.

The Royal Guard is my way of paying homage to London.

read more
The Royal Guard is my way of paying homage to London.

The part of the artist is the effort to engage organic expression in a way that has not been previously achieved.