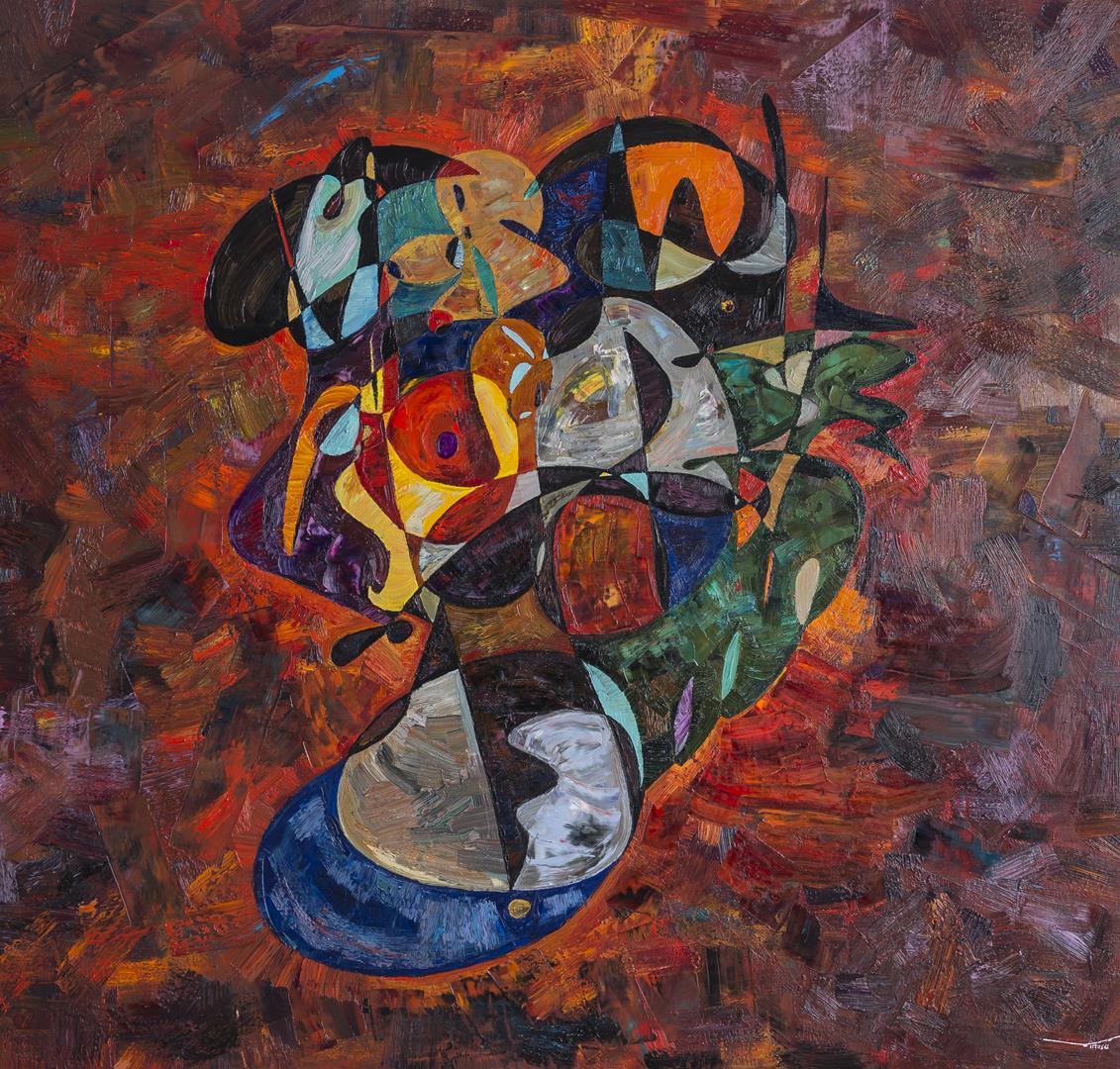 Exceeding the confines of a vast canvas through its spectacular assault of unrestrained expression and brilliant color, Revolutionary Ideology by Gheorghe Virtosu encapsulates the full force of the artist’s abstract vernacular. Titles do not simply function as a means of identification, but also as guides to the pleasurable process of interpreting and understanding works of art.

The author asks us and himself “What is the fundamental of revolution?” Is it a leader? Is it his or her supporters? None of those, since the only element that unites a leader and his followers, is fighting for certain ideas, standing for the principles you believe in. Any real revolution is impossible without ideology. It is the bending substance, which turns a horde into the historical power.

Ideology is about changes. Therefore, representing the subject cannot be static. The abstract art master needs no slogans, no obvious manifestations, and no for visually recognizable characters for that. He chooses active, free-flowing forms interlacing with each other, shaping up the pulsating irregular ‘conglomerate’. That conglomerate is about to fall apart, yet it is kept together by the resistance of the ‘outer’ space - the aggressively liberate, expressively rendered background. Revolutions are always the ‘reaction’ to the situation - they ‘dismantle’ a system to replace it with the new one. It’s curious, how, avoiding sharp forms, the artist still manages to catch the relevant portrayal of destruction/creation dichotomy.

Along with the positive transformational aspect of revolutionary ideology, the artist is interested in showing its shadow side. At a certain point, the ideology often becomes the frozen, static system that starts defending itself, trying to overcome other types of view and oppress anyone, who’s doubting its principle. The tragic samples of the Stalinist regime are more than a convincing illustration of the point. Therefore, the creative core of the artist is based on visual ‘struggles’ - a viewer has to wander through the labyrinth of chaotic drawing and elaborated texture. Wide brushstrokes oppose the contour of the shapes. The predominance of red, orange and yellow, underlined with small parts of ‘cold’ blue and purple, gives the abstract painting composition a vigorous flavor. The white highlights on small yellow fragment produce the effect of the hitting substance. The very look at the image leaves the vague impression of the boiling energy, restless spirit, along with anxiety and unconscious fear. The latter is even more obvious when you spot the silhouette of a snake on the right side of the image.