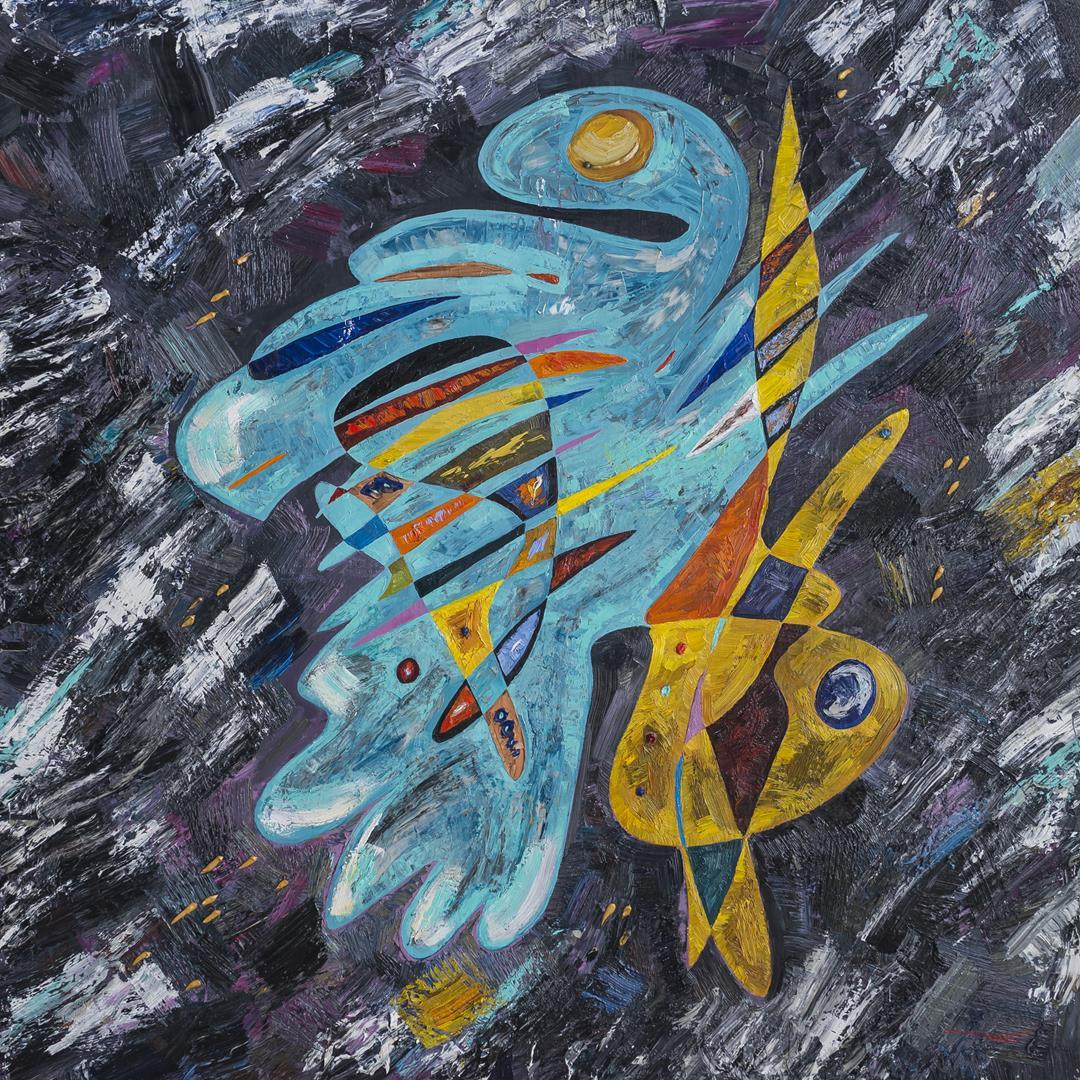 Exploring the definition of art is an act of critical thinking which is creative thinking, and the process often requires a belief in the question, rather than an expectation of hard truths or answers. Through active questioning, exploration, and trial and error, we uncover multiple valid perspectives in Virtosu's work. Exceeding the confines of a vast canvas through its spectacular assault of unrestrained expression and brilliant color, Quasimodo In Love by Gheorghe Virtosu encapsulates the full force of artist’s abstract vernacular.

Quasimodo, better known as the Hunchback of Notre Dame, suffered from a spinal deformity and even more by the jeers of the crowds, the fear of people betrayed upon seeing him. Quasimodo is descending into the yawning gap where monsters reside. A close look at the edges and background of the painting depicts a circular movement and Quasimodo’s head down and his humpback up. This means that he is falling into a vortex.

I like to think that my works hold the ability to reach out to my readers or viewers, and in return they can relate to the characters and situations described in my works.

The vortex could be one of two things. The first is his descent into inner monstrosity, matching his outer self and the fear and disgust people exhibited when seeing him. The second is his descent into love with the Gypsy girl, Esmeralda whom his master had ordered him to kidnap. He refused to do her any harm but just because of his physical appearance he was punished through a public whipping. The crowds were cheering at the spectacle because when they looked at him they did not see a human but a monster. Esmeralda was the only one who saw him as human and handed him water to drink as he was being whipped. Hence, the vortex could be Esmeralda, the girl he fell in love with.

Interestingly, the colors selected to paint Quasimodo are a light blue, a strong yellow and interspersed with other colors such as orange and red. They are the colors of innocence. The background, however, is grey, purple, and black. They communicate threat. The abstract painting, thus, stresses Quasimodo’s innocence and society’s guilt. The background brush strokes are forceful. The different colors, the shades of grey, a smattering of white, purple and yellow, start and then are interrupted with another color. The viewer’s ability to see the brushstrokes, where they begin and where they end, communicates the intensity of societal harshness. It is strange that Quasimodo, despite the visual of his falling into a vortex, is painted with warm and bright colors and the brush strokes are so fine that viewers cannot tell their beginning or their end.