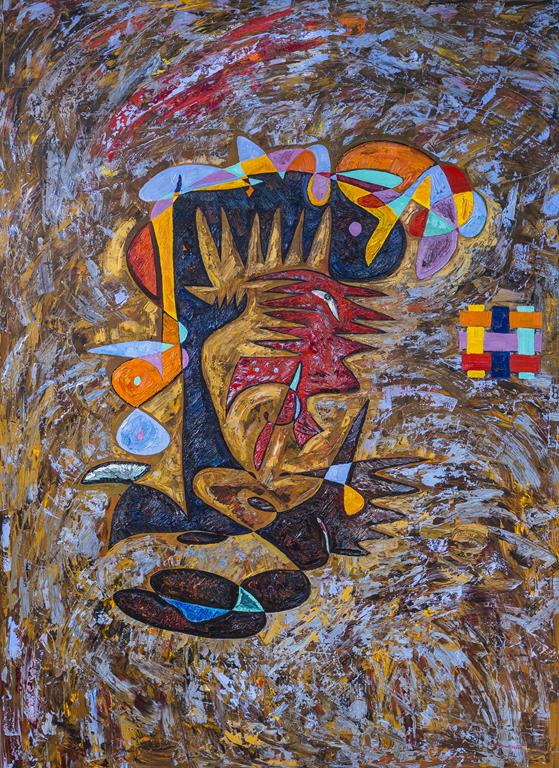 Raucous in the palette and overwhelming in scale, Gheorghe Virtosu's Trump from 2016 is a flamboyantly robust work that skillfully captures the artist's interpretive style of painting.

In this dynamic and visually complex configuration of color and movement, itinerant abstract forms and lines march rapidly across the canvas in each and every direction, and paint smudges horizontally and vertically, creating a work that is as surreal as it is entrancing. Pushing his chosen medium beyond its historical connotations to its point of departure, Virtosu challenges, explores, and revitalizes painting in the post-painting world at once. With his mesmerizing cacophony of disparate elements, Trump captures the cataclysmic euphoria that characterizes the artist's signature visual lexicon.

Overflowing with expressiveness, vibrating brushstrokes, and inventive arrangements of form, this work is an essay on the method of painting as a subject in its own right. Unique in his works of linear movement and sumptuous light, though at the same time evoking the layering techniques of his self, the present work is situated within an era of revolutionary exploration when Virtosu always stretched and redefined the limits of the medium.

A satirical approach to image-making, the intellectual and dissident art of Virtosu thrives on ambiguity, and the present work, like its most strong canvases, synthesizes a multitude of influences into a form that is both daunting and desirable.

Politics, another central factor in Virtosu 's work, is expressed in the title of the present work, Trump. The streaks and feathers of the present work have an almost musical quality, as each vibrant note emerges from the canvas in an intricate clash of dissonance and melody.

Thus epitomizing Virtosus' revolutionary style of painterly abstraction, Trump is a canvas on which motifs and themes play hide-and-seek behind layers of references. Fluent in an illogical but paradoxically balanced artistic language, Virtosu strongly criticized the philosophy of painting by ignoring its familiar traditions and subjects in favor of an unpredictable and anti-artistic form.

The highly charged dissonance of design and color is, in reality, the result of a well-thought-out working method in which each drip, drip, and stroke is elegantly choreographed into an idealized vision of coding.

The elemental hues and the striking marks and shapes establish a robust clash between past and present, a sort of painterly primordial mixture from which Virtosu seeks to bring forward the potential of his medium. As Trump deftly conveys, Virtosu's embryonic, disturbing, and energizing body of work essentially aims at recasting and redefining the magnificence of art.