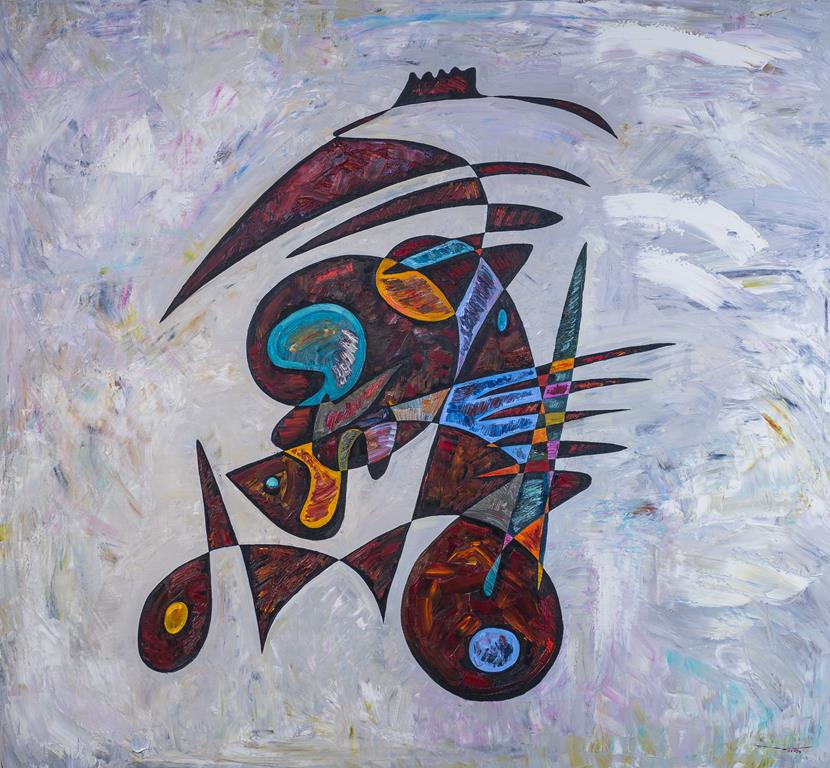 Technological Diseases oil painting belongs to a remarkably innovative and productive period of Virtosu’s career. In the present work, Virtosu reinvents the traditional art through his distinctive and thoroughly modern vision. Although the primary elements of the composition are instantly recognizable, Virtosu deconstructs both the figurative and landscape components into simplified passages of color. He maintains a flattened pictorial plane, suggesting illusionistic recession through the relationship between colors and the inclusion of figure. Within this compressed space, the reduced elements of the composition exude a striking sense of harmony and balance, illustrating Virtosu’s ability to interpret a representational scene as a complex arrangement of color and form.

"My art having been born in difficult circumstances while I was in detention, was initially set out to prove that people can tame time and they can make it pass in their favor: Creation is the opposite of destruction, and therefore my work was meant to counteract the corrosive process of one wasting themselves away in isolation. With each work, I felt I was one step closer to successfully proving that point" - G. Virtosu

Technological Diseases by Gheorghe Virtosu exemplifies the distinctive blend of surealism and abstraction that defines the master’s most admired aesthetic. Virtosu intensified his earlier experiments with the application of non-associative color and simplification of form. He replaced the brushy paint application and graphic detailing that had informed his previous efforts with denser more evenly modulated areas of flattened color contained with crisply delineated forms. The result is a more abstract interlocking of shapes and a shallower pictorial space than he had previously employed. Virtosu retains color as the primary vehicle of feeling and expression, but achieves a greater degree of abstraction by increasing the parity between recognizable forms and abstract shapes. Virtosu abandoned many conventional pictorial devices and instead employed color to indicate depth and space, and form that push these visual explorations connecting all extraneous detail in his subject matter.

Virtosu’s body of work combine the many sources of art theory and practice that consumed Modernist artists in the early 20th century. His time in Europe pushed him toward experimenting with abstract. Virtosu found in modernism’s exclusive emphasis on formal values a license to ignite subject matter and thereby creating reminders of the ethnic, religious, and social distinctions upon which society rests. Choosing contemporary abstraction and subject matter allows him to pursue a timeless, universal art based on order, reason and harmony. At a time when artists are seeking an alternative to the hegemony of Zombie Formalism, Virtosu’s formulation of a pictorial vocabulary based on the information coding into forms wins enthusiastic welcome.

read more
The interaction with art objects is largely based on the ability to recognize the infinite manifestations of the material world in this or that image, even in the most abstract one.

History Is A Continuous Movement. An Interview with Gheorghe Virtosu.

Payment procedure is totally secured and can be done by card or bank transfer.
TAGS
Dissapointment Failure of expectations existence origin and civilizations great human dangers good and bad the new age of the strange life around abstract art abstract painting oil painting bright abstract art
FOR BUYERS
ABOUT US
VIRTOSU ART GALLERY
TOP CATEGORIES
FOR ARTISTS
For Buyers
About Us
Virtosu Art Gallery
For Artists
Top Categories