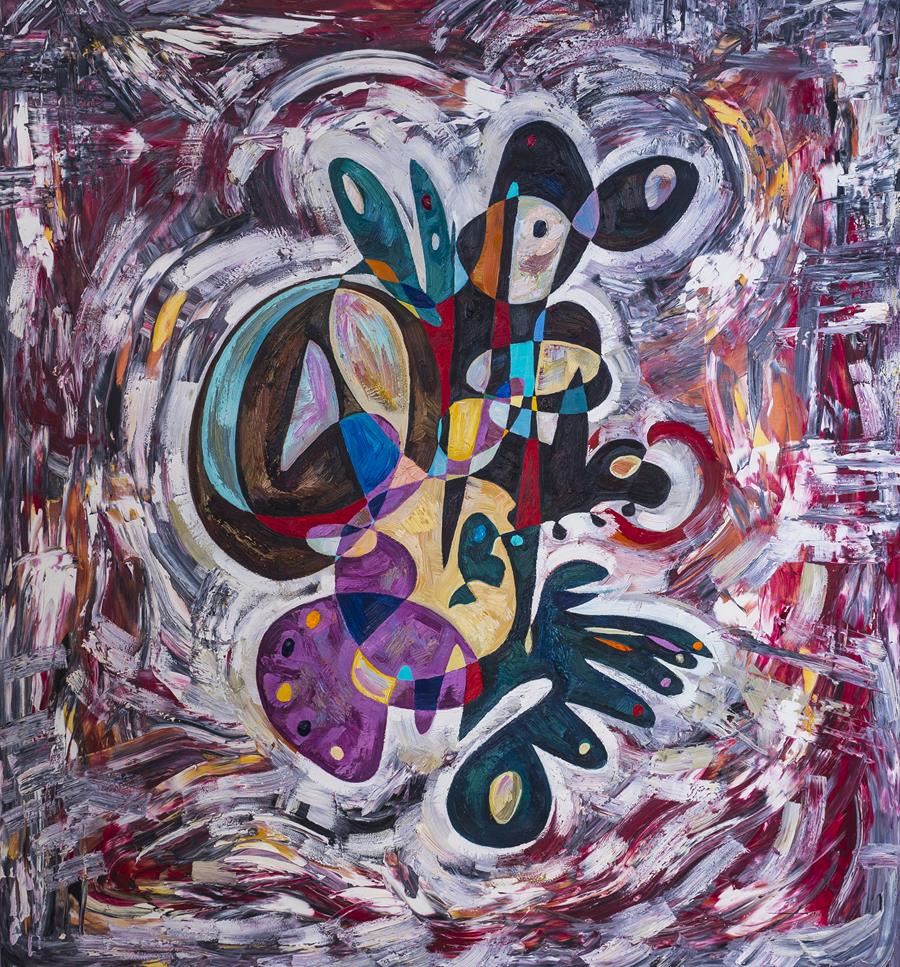 The oil painting provides a new interpretative approach to Virtosu Spirit Series, and on this occasion, the viewer is presented with the artist view on Indonesian culture. Done as a semi-abstract piece, it tells a whole narrative. Painted in 2015, the Indonesian Spirit (2015) represents a crucial point in Virtosu's career, in which the artist establishes his highly acclaimed, mature and unique style. Fuelled by inspiration and a new understanding of representation, the artist's method does not mimic European or American artists but instead incorporates a new stylistic.

Indonesian Spirit (2015) is currently being loaned and exhibited in the National Museum of Indonesia, Jakarta.

Gheorghe Virtosu built a revolutionary ambitious artistic philosophy that is in tune with a real urge to create, regenerate, reinvent, and to instigate creative social and cultural evolution. There is no secure or final sense of what Virtosu's Indonesian Spirit (2015) means; however, the title suggests otherwise. His creation is deliberate, absolute, and masterful, and entirely ready to one's natural search for meaning, which we seem to ask for. The meticulous formation and the vibrant colour of purple arouse our curiosity creating a unique viewing sensation that is simultaneously exciting and sombre, solemn and buoyant,

Indonesian Spirit is a term often contrasted with knowledge and scholarship in Indonesia. Indonesia's real problems are staggering and call forth the sympathy of any observer. However, these problems seem rendered unresolved by the incompetence of the leadership, which appears unwilling or unable to accommodate the diverse but legitimate demands of the Indonesian people. One can only admire Indonesia’s Spirit? A spirit of protest and an attempt to build a better society. At the same time, one can only be appalled with the actual manifestations of that Spirit. At present, there is no evidence of effective attempts to achieve or even to move in the direction of the new society.

The abstract painting resembles the chaos, in which all the elements are interrelated. However, the Indonesian Spirit (2015) has a logic to follow. The picture's central figure looks like a jigsaw puzzle with numerous pieces, perfectly fitting each other. In the present work, Gheorghe Virtosu employs a purple based tonality, which varies in value. Warm colours intertwine in the painting, making it vibrant and saturated. Due to the contrasting tones, the abstract figure in the foreground stands out from the muted blue popping away from the ground. The shape of the subject matter is rather curvaceous, as it has prevalently flowing, thin, and curved lines. Also, the balance is noticeably symmetrical in the picture.

Indonesian Spirit (2015) shows a refined interaction between medium and representation while serving his purpose of creating an energetic scene. Talking about the Spirit of a nation using the language of non-figurative art seems to be almost impossible. The character is always specific, while abstract work avoids certainty, appealing to facts and emotions is crucial in Virtosu's art. However, we are often mistaken, excluding facts from the past. All metamorphosis and achievements of the epochs affect not countries, not some ephemeral societies - it changes the lives of people, apprehension of new ways of seeing is an integral part.