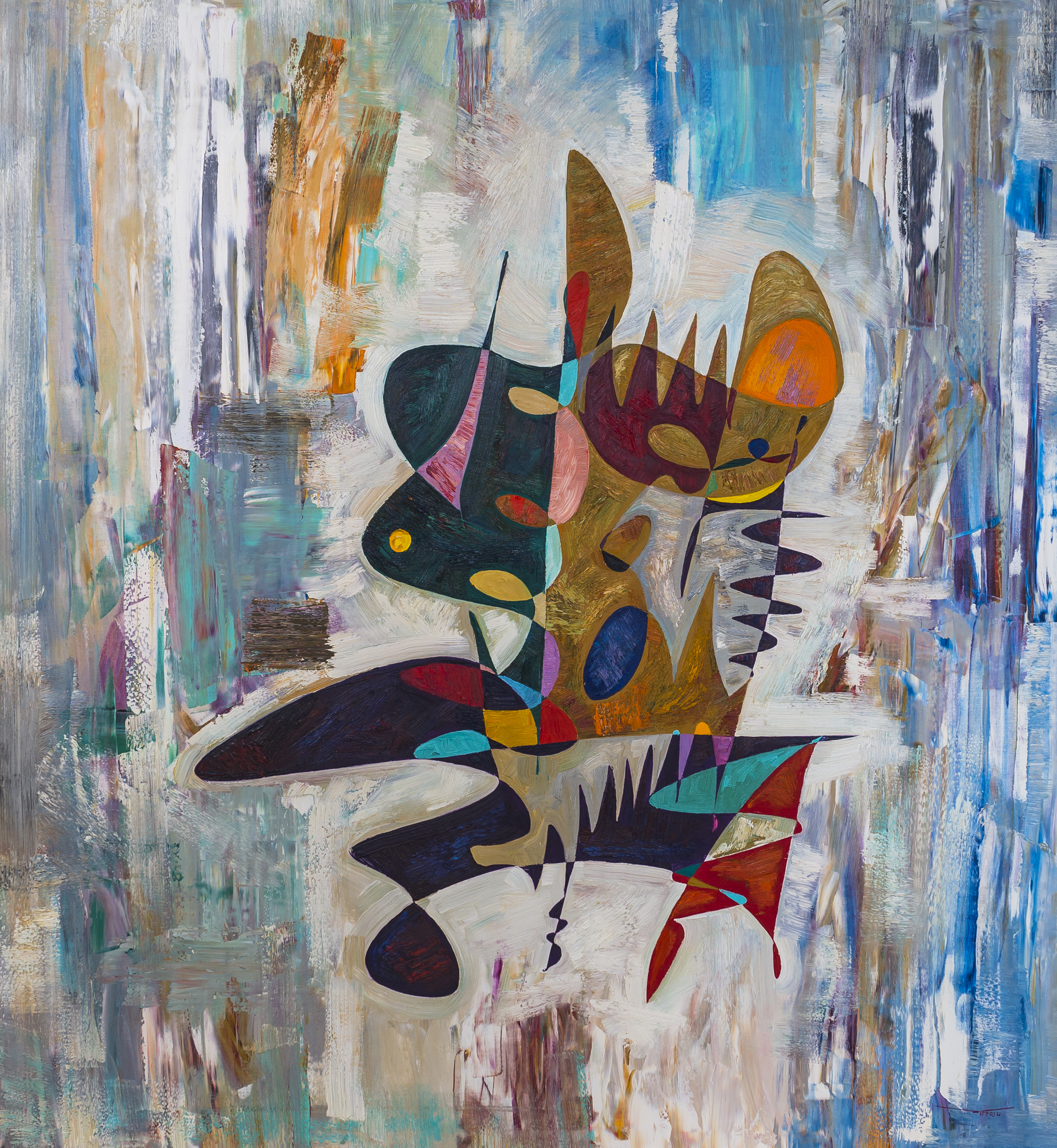 Gheorghe Virtosu built a revolutionary ambitious artistic philosophy that is in tune with a real urge to create, regenerate, reinvent, and to instigate creative social and cultural evolution. There is no secure or final sense of what Virtosu's Guy Of Lusignan (2015) means; however, the title suggests otherwise.

The artist composes and views artwork in unique ways that reflect his knowledge, reference, expertise, and emotions. The aesthetic experience encloses the relationship between the art object and the viewer. In terms of the creator, there is an emotional attachment that drives the focus of the artwork. Virtosu is entirely in-tune with his art as his urgent order is to enrich its creation. He once said that the piece of artwork progresses throughout the creative process, and so does the artist. Both grow and change to acquire new significance.

"The art i create reveals a message or an idea, involving a performer, that is usually the artist, with an engaging audience viewing the work of art. Many artists are highly idiosyncratic as they express themselves in a unique and tactful way." - G. Virtosu

Guy Of Lusignan (2015) is currently being loaned and exhibited in Louvre Abu Dhabi.

Guy has the distinction of being the king who lost the Kingdom of Jerusalem by leading the Christian army to an unnecessary but utterly devastating defeat at the Battle of Hattin in 1187. Guy of Lusignan was a French knight, the son of Lusignan dynasty Hugh VIII. He was the king of the crusader of Jerusalem state. He arrived in the Holy Land, where his brother was a prominent figure. Guy was hastily married to Sibylla to prevent a political incident within the kingdom. The health of his brother-in-law, Baldwin IV, deteriorated, and Guy was appointed regent for his stepson by Sibylla, Baldwin V. The history led to the succession of Sibylla and Guy to the throne. Increased hostilities with the Ayyubids marked Guy's reign ruled by Saladin, culminating in the Battle of Hattin in July 1187—during which Guy was captured—and the fall of Jerusalem itself three months later.

Art can be a criticized field for several reasons as it is not considered a science. Respectively, research can be scrutinized for its accuracy and relativity. Illuminati (2015) embodies Virtosu's mastery in an observable manner, and the audience interprets the artwork in multiple ways. Virtosu's inspirations are fueled through his perspectives, experiences, perceptions of the world. For Virtosu, art comes from within oneself, and it is expressed in the outer world for the entertainment of others. Everyone can appreciate a piece of Virtosu artwork because it speaks to each individual in unique ways—therein lies the criticism of subjectivity.

Guy Of Lusignan (2015) shows a refined interaction between medium and representation while serving his purpose of creating an enigma. Talking about the historical personality of Guy Of Lusignan using the language of non-figurative art seems to be almost impossible. The character is always specific, while abstract work avoids certainty, appealing to facts and emotions is crucial in Gheorghe Virtosu art.

Within Guy Of Lusignan (2015), the viewer is transported into Virtosu's vibrant world by the overpowering formal strength of the painting itself and the richly painted forms. While inside, the viewer finds himself inextricably tangled in interactions, relationships, and performances as yet unknown or, indeed, even imagined. Overturning conventional social, artistic, and cultural narratives alike, the oil painting is an enduring testament, not only to the singular potency which characterizes Virtosu's individual graphic vernacular but to the extraordinary benefaction he has made and still makes to the progress of contemporary art. 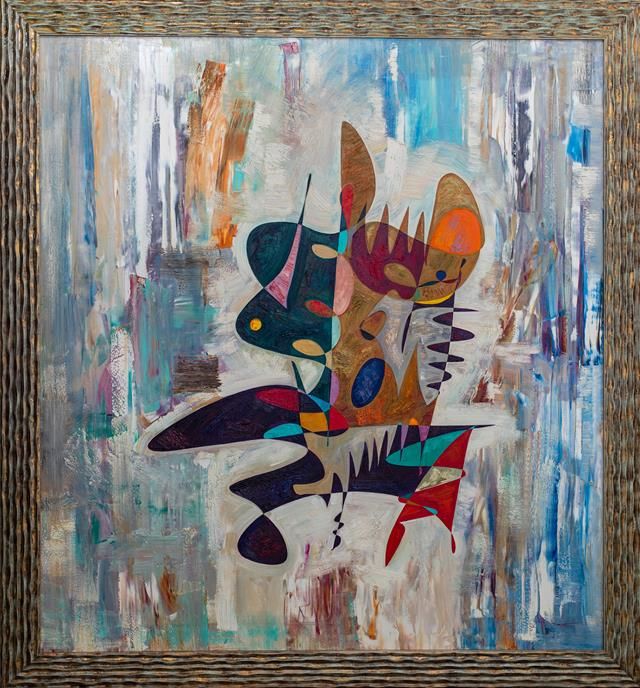 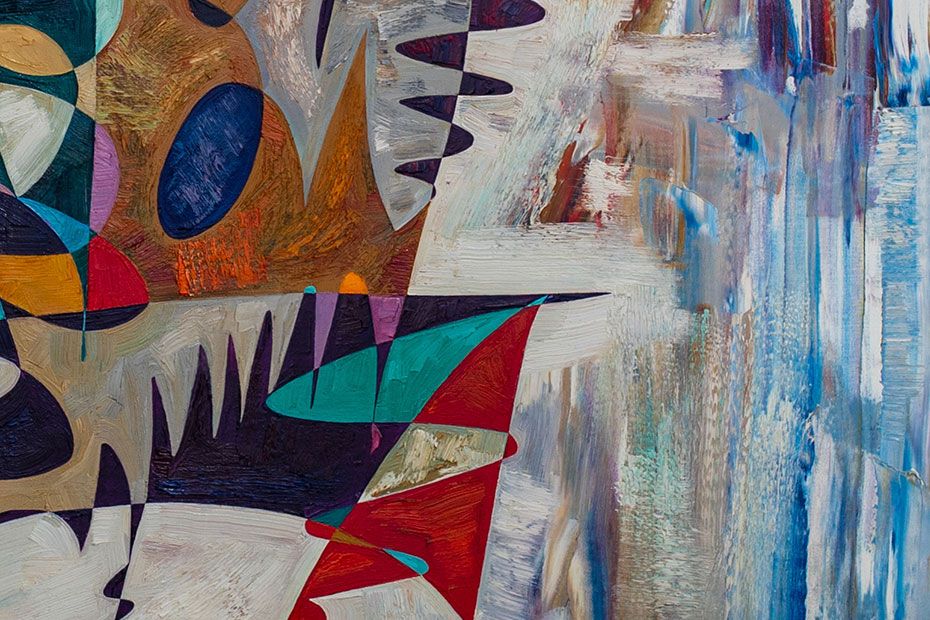