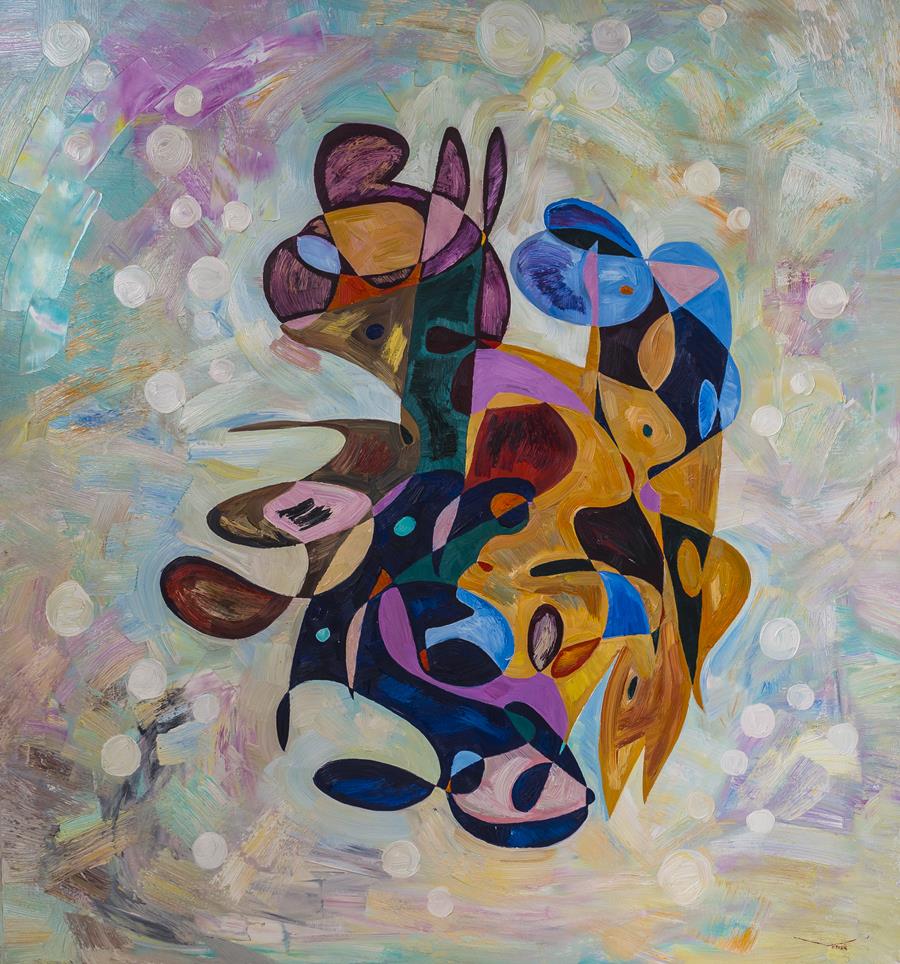 At once, hypnotically tumultuous and exactingly constructed, Gheorghe Virtosu’s monumental masterpiece Freddie Mercury (2015), is a provocative synthesis of abstract hieroglyphic symbolism and visual vocabulary. Through a distinctively informed pictorial language, Virtosu superimposes incendiary emotive marks and calligraphic ciphers upon an intricately rendered blueprint of a well-known singer, with gesture and form clamoring for attention. His explosive graphic explorations of form and space attempt to articulate the power structures and methods of mapping that define the contemporary pictorial landscape, as well as his place within them.

Freddie Mercury (2015), as a model of Virtosu’s unconstrained symbolic layering and visual, requires unearthing. Beneath the explosion of free-form scrawls and kinetic vectors lies a subtly rendered personal assemblage, anchoring the composition in formal terms, yet resisting any ready legibility. He is reflecting his view that builds characters and serves as metaphors for complex power structures, and socio-political realities. Its interaction informs the piece of the shape foundation with the background underneath and the other symbols around it.

Similarly, Virtosu conceives his works in globalized terms, drawing from diverse historical movements as well as his disparate heritage. Demonstrating a conceptual clarity and technical virtuosity, Freddie Mercury (2015) forcefully and stunningly describes the complex and multivalent experience of contemporary art. Freddie Mercury (2015) fuses the cartographic logic of character mapping with the expressiveness and apparent irrationality of the centerpiece, their union displayed on a monumental scale. Engaging with art historical iconography while activating an intimate personal vocabulary, Virtosu’s painting offers a new system of communication through abstraction as a way of articulating the essential paradox of disorder and order that defines the complex nature of our shared experience.

Executed in 2016, Freddie Mercury is an early example of the Gheorghe Virtosu's 'Stars' sequence painted in the first year of the artist's life-giving solitude period. In 2004, Gheorghe Virtosu endured a four-year political exile from his country, during which he was put under close surveillance by the European Intelligence Agency. Abandoning his rigorously clinical serializations, Gheorghe's brushstrokes were increasingly free-flowing and multi-directional, exhibiting a growing dynamism and dexterous calligraphic touch. Gheorghe named these new series 'Stars' referring to the reflective tolerance and increased receptivity of the other. From the beginning, Freddie Mercury is a significant work that embodies Gheorghe's transition to regulated yet organic intuitive spontaneity. The artist examines the notion of infinity through a continuous examination of historical facts.