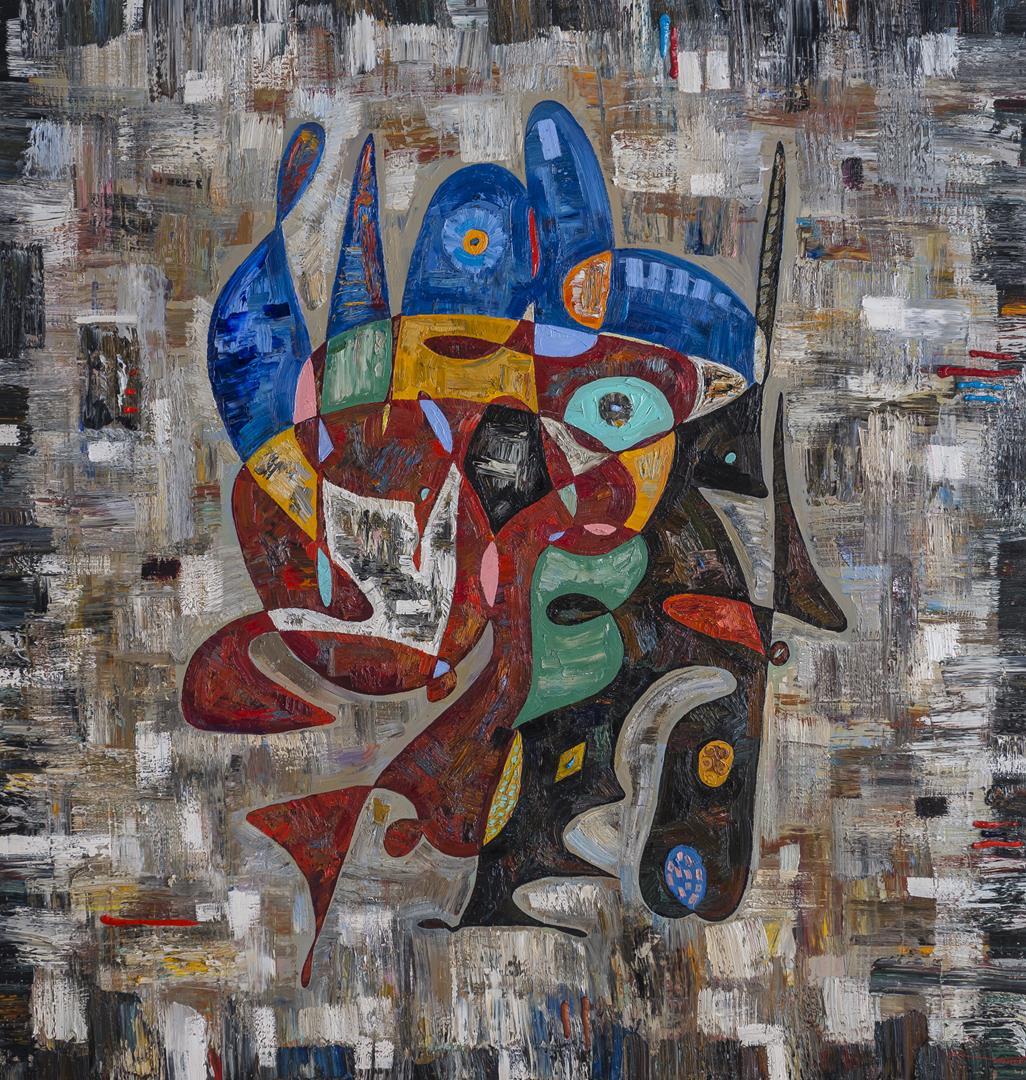 World Domination XXI Century (2017) came, with the artist in his mid-fifties, as the climax of a period in which Virtosu's paintings with their congested, deeply luminous color, contrast between flowing forms, reach a total painterliness in which shapes and image coalesce ultimately and every inch of the canvas quivers with teeming energy.

Virtosu's paintings of 2017 are an annihilation of conventional styles. The images are about the quality of affection, the quality of being. The paintings from Collection 2017 are crystallizations of amazement and experience of having mind and body total synergy that is all delight.

The background is busy and highly artistic, employing fine brush strokes. The artist uses dull colors, some of which are sand colored. These are gold, brown, white, hints of blue and touches of red. The abstract painting centerpiece is brilliantly patterned. The colors, including the black assumes versatile, blocks, oval, spikes, and flowing. It is an aminate painting and one can feel its force of beauty.

The background clashes with the centerpiece. While the latter is mostly restful, the brushstrokes in the area are unrestrained and strong, powerful and are perfectly suited for the colors used. These are black, varying hues of grey and purple and some gold-yellow. The background is not patterned, the painter uses wide and forceful strokes for space against delicate and finer brush where restrained.

Bible prophecy reveals that once the superpower seat is left vacant, the three power blocs rising to dominance now will clash in a colossal global power struggle—a period the Bible specifically calls the “times of the Gentiles”. Current events show how dreadfully near we are to this time, when nations will vie for the superpower slot!

Virtosu does not strive for resolution in his works; he seeks instead to capture the variable quality of life, all in a supreme of tactile paint that defies the limits of the canvas just as it shatters the boundary between figuration and abstraction. With unparalleled World Domination XXI Century (2017), the artist reached his formal climax in the clear brilliance of the painting's burning color palette and the ripe opulence of his imagination. Through each detail, the artist here asserts total mastery of his medium. Thick passages of intense purple convene with affluent, sections of cream and brown, creating the impression of action. The viewer cannot help but be absorbed in the remarkable imagination and fantasy of the oil painting, ingested by every sensory dimension ensnared in its abstract forms. Thought beat across every square-inch of World Domination XXI Century (2017) with an ineffable rhythm: "It is breathtaking to try and decode the messages traced in Virtosu's creations, and the message is unmistakably present…" Loaned to MOMA for almost two years, this occasion marks the only appearance of the World Domination XXI Century.

Finding The Freedom Of Expression