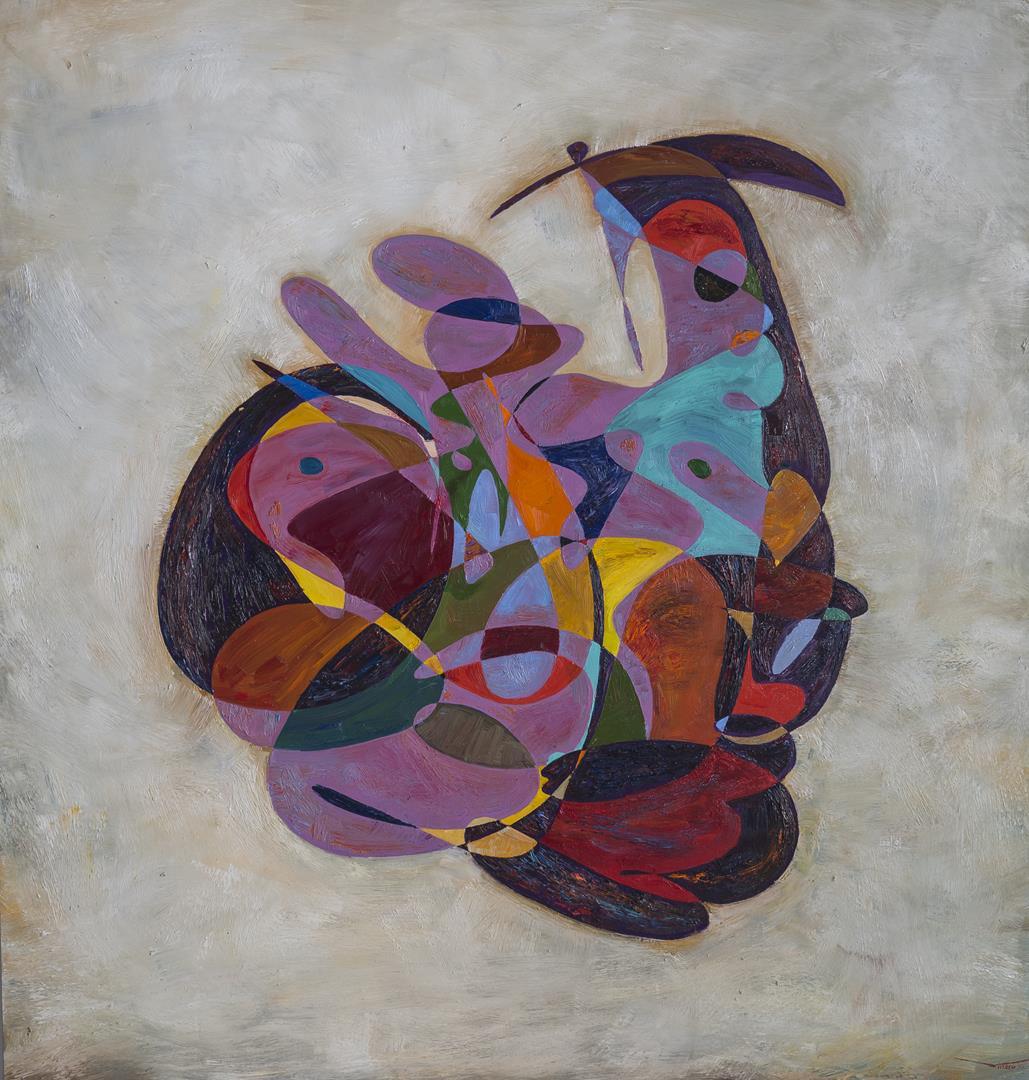 Addressing the common vision of femininity, the contemporary artist uses unusual for his canvases light, pastel background and subtle purple shades in the coloring of figures. Such delicacy of the palette causes the slight feeling of irrelevance since politics is normally connected with the notion of dominance, leadership and sometimes even aggression. Women in politics are encouraged to adopt some masculine behavior. Nevertheless, the contradiction between the coloring and the subject is softened by the inclusion of catchy warm tints of yellow, orange and red: they are ‘activate’ and enliven the main soft hues.

Yin, the female side of classical oriental ‘Yin-Yang’ opposition, is traditionally defined as passive and slowness. But woman politician can’t afford this. She has to be in constant hustle; thus, the artist chooses smooth, yet active winding lines to represent the state of flux. Their clarity remains almost uninterrupted by the brushwork: Virtosu favors expressive abstract painting manner, however, for this work he ‘mutes’ it to underline the gentleness of tinting.

Being a harmoniously composed piece, a closer analysis of Woman Politician by Gheorghe Virtosu unveils the various visual ‘oddities’ in it. They consonate with the number of inner and social conflicts a woman has to overcome if she wants to get into the political game. This abstract painting also perfectly demonstrates the fact Gheorghe Virtosu’s art isn’t purely Abstract art. Abstract art remains silent to the audience; while Gheorghe, despite detaching the image from depicting the real-life objects, still feels the need to convey the message through his work. For this purpose, he accompanies every piece with an eloquent title, which triggers associations and engages the viewers in the dialogue. And in the case with the discussed canvas, the contemporary artist doesn’t want to lose the control over the painting’s interpretation, as we are clearly pointed out with the gender vector of its content. And instead of suggesting our own versions, we, like detectives, have to track the development of the author’s thought and reconstruct the image from the puzzle of lines, curves and colors. Observing deeper, we start realizing it’s not just an abstract archetype of Woman of Power - it is the portrait. And I bet you know the name of a model.