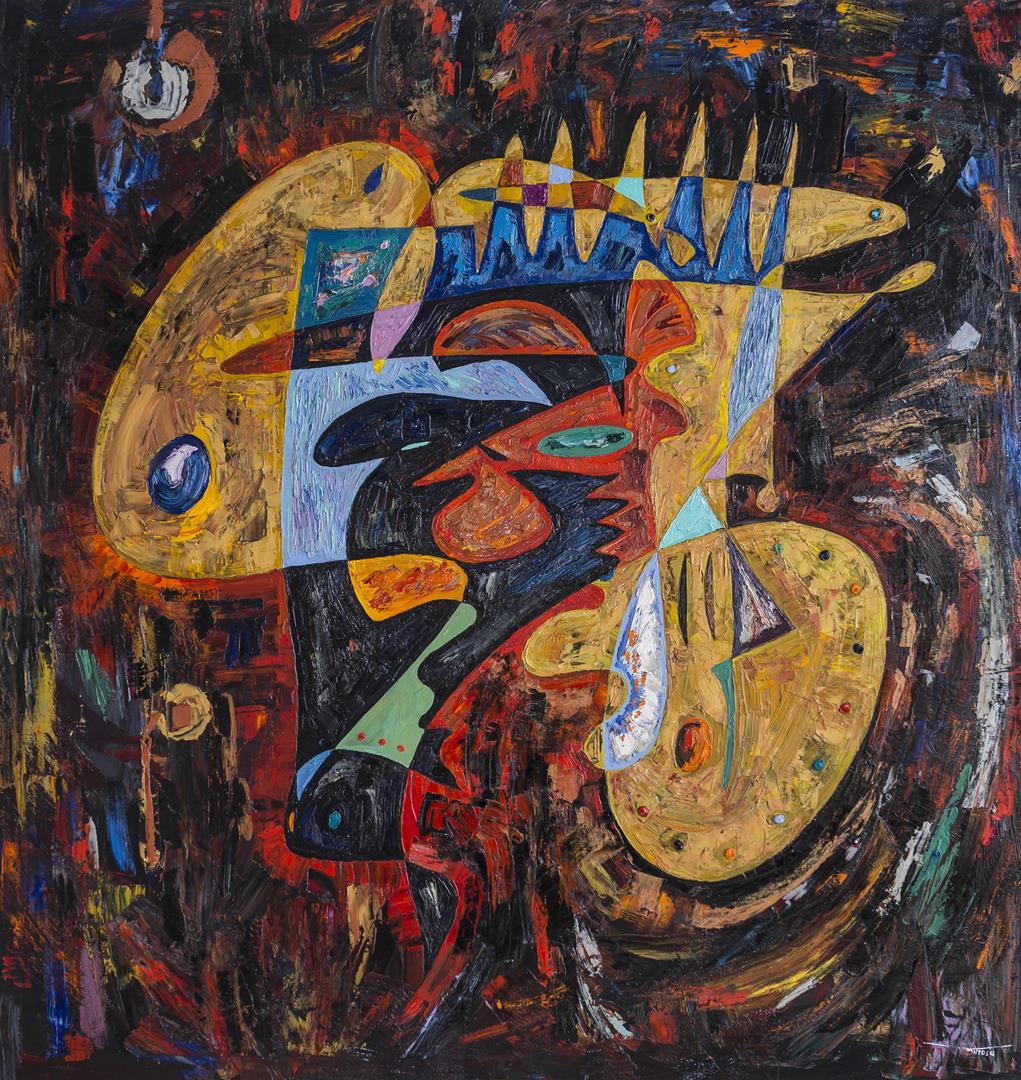 While the organized chaos of the background – particularly disorientating while at the same time transfixing – denotes the turbulence of the time, our figure, or figures rather, is (or are) torn and bereft of unity, perhaps to articulate a war within the man. Because our figure looms so largely in this abstract painting and because our centralizing eye is directed between the two large discernible heads on a diagonal axis, a certain interiority is effected, in an exciting tension with external necessity and horror. Looking at Winston Churchill by Gheorghe Virtosu, we first glance an incredibly busy and complex arrangement of forms. The response to what we see is formed by a lifetime of knowledge and experience and the culture and time in which we live.

At the center of the abstract painting image, at the intersection of the heads, is a dense area of black and red adumbrating perhaps many incipient or allusive faces. The black's pervasiveness here is a reminder of Churchill's own battle with depression to which he euphemistically referred as 'the black dog'. In the visual splitting of the man, Gheorghe Virtosu marks a divergence of the man and his historiographic myth, a myth that Churchill himself perpetuated in his writings. But also in this arresting / commanding / powerful abstract painting, there is a divergence within the man – between the fearless resilience of a war leader and the vulnerability of this - and even every human - which establishes a disconnect between the public and private realms, within the processes and myths of the formation of subjectivity and identity.

The oil painting canvas is pock-marked with eyes, especially in the lower head. This tallies with the mythopoeic idea of Churchill's strategic nous and perhaps also to the fact that at one stage, and actually on stage, the eyes of the world, or Europe at least, looked to this man as its proxy actor in the noble cause. The complexity of the man and of the myths surrounding him, necessarily dictate here an aesthetic of complexity. Thus, lines that sweep broadly and eddy minutely and colors that clash, yet are held by their borders in a tense measure of adherence, and suggest a monumentality that is a paean to the indomitability of the human spirit in adversity, be it private or political.