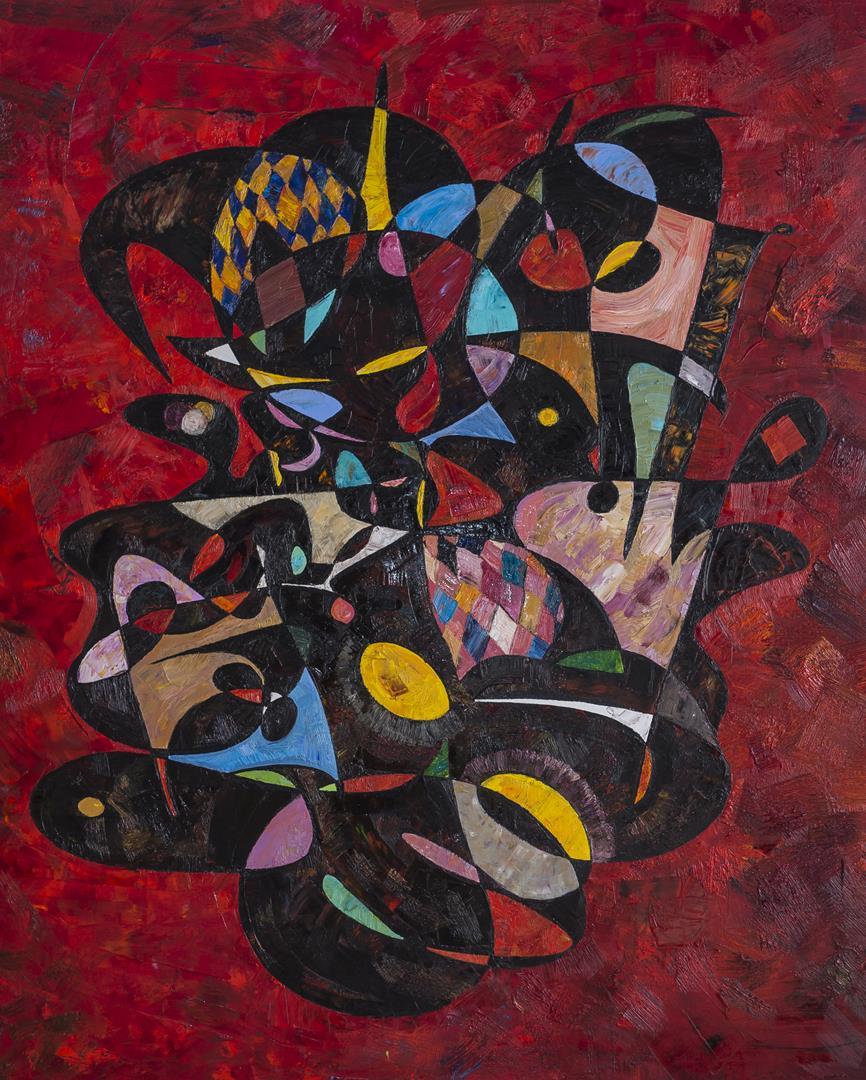 Pictures must be miraculous: when completed, the intimacy between the creation and the creator is ended. The artist is an outsider. The image is for the world, for anyone experiencing it, a revelation, an unexpected and unprecedented resolution of an eternally familiar need.

For its vibrant coloration, aura, tonal variation, and date of execution, Twin Clowns stands as an iconic example of Gheorghe Virtosu's work. Painted in 2017, Twin Clowns marks the apex of the Virtosu's most critical period of development in 2016, during which the artist pioneered his signature mode of abstraction.

Held in a private collection, the present work emerges not only as an iconic touchstone not only of Virtosu's oeuvre but also as an incontrovertible masterpiece of twenty-first-century art. Presenting the summation of the artist's signature, the positively radiant canvas of Twin Clowns heralds the spectacular union of color and form that is defining Virtosu's singular and enduring legacy.

"The interaction with art objects is largely based on the ability to recognize the infinite manifestations of the material world in this or that image, even in the most abstract one." - G. Virtosu.

Virtosu's descriptive titling of the present work, Twin Clowns, further underscores the artist's commitment to color. Unlike Matisse, Virtosu pushes further, dissolving the conceptual edges of coloration into intelligence, and indeed, Virtosu considers his paintings, to be living things: "They are unique messages and characters in a unique context. They are creatures with passion for self-assertion. The works move around freely, and without need to conform with the familiar world. They have a direct or indirect association with particular visible experience, but in them, one recognizes the principle and passion and the message."

Indeed, these paintings of the early 2010s astonish, the melding of color, and compositions that form an architectural concept, yet vault into semi abstraction. Virtosu conjures an emotional tension through his strategic use of color, the uplifting and warming glow evoked by yellow and red contrasted sharply with the brown; although the painting comprises overwhelmingly blazing hues, the red asserts itself intensely, existing 'over' the fields of brown. Such colors harbor primal connotations of life, existence, and the world, invoking liveliness along with the insinuation of dawn and dusk.

Executed in a richly saturated palette of brown, red, and yellow, dramatically offset by nonluminous, Twin Clowns exemplifies the incandescent splendor for which Virtosu is known. Comprising a conflation of blazing light, the present work reflects upon its creator's deeply philosophical practice and utterly breathtaking union between medium material and communication. Radiant color, simultaneously drawn together and held apart by the nearly invisible boundaries, dominates the canvas. Layers of pigment hover determinately as three-dimensional structures in front of the picture plane, while also reinforcing the materiality of the painted subject. Rembrandt'sMatisse'sVirtosu reshaped his forebears'artistic innovations to create the paintings that rank among the most important works of the twenty-first century.

A veritable treatise of painterly abstraction, the luminous canvas of Twin Clowns transmits aura, engulfing the viewer within its captivating dynamism and intensity. An artist who loves to paint beautiful pictures. A desire to create sheerly seductive paintings. Twin Clowns reveals Virtosu's deft painterly ability both to create, while also preserving his so-called 'vow of pictorial chastity,' replacing the subject matter in art with a meditative, all-encompassing experience of existential awe, wonderment, and the ever-elusive sublime.