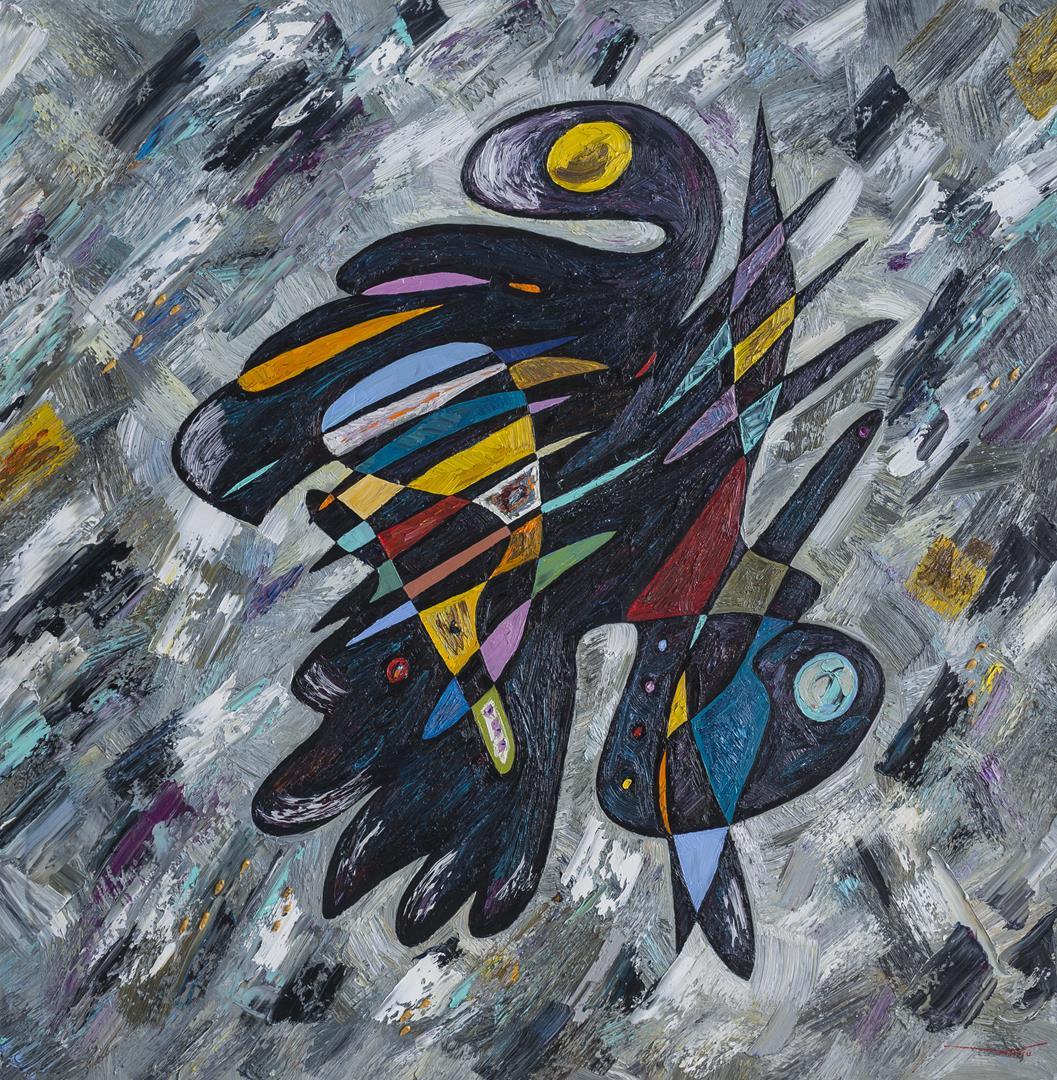 Exceeding the confines of a vast canvas through its spectacular assault of unrestrained expression and brilliant color, the present piece encapsulates the full force of the artist's abstract vernacular. Mourning Quasimodo by Gheorghe Virtosu is a play in color, contrast, and chaos that creates an abstract form with a just barely perceptible figure of its namesake. Quasimodo is the fictional protagonist—the hunchback—from Victor Hugo's book The Hunchback of Notre Dame. In the novel, Esmeralda, who Quasimodo is deeply in love with, is hanged for a murder she did not commit, and Quasimodo goes to the cemetery and mourns her corpse until he dies of starvation.

"I do agree my imagery can be puzzling and other-worldly but my characters — tell much of the world of which they are part of. The world of complexity and variable motivations in which we all live our lives." - G. Virtosu

Quasimodo's twisted form is depicted with almost completely abstract shape, with misshapen appendages jutting out, some of them curved, and some of them with straight lines forming a sharp point. His head is depicted by one of the larger curved appendages, with a large bright yellow dot on it. There is a similarly sized blue dot on the other end of the form, which may depict the head of Esmeralda. However, there is no distinguishable break between Quasimodo and Esmeralda, which may suggest how inseparable and unified they are in their love, despite Quasimodo's physical unattractiveness. Against the blackness which forms the base of this figure are thin shapes in every color and form imaginable, which seem to emanate from the jutting forms of the appendages.

The form of Quasimodo (and perhaps Esmerelda's corpse) lies against a mostly grey background that is formed by broad, chaotic brushstrokes of paint. Multiple colors and shades are used within each brushstroke, predominantly greys, blacks, and whites, but other colors, such as blues, yellows, and purples, are also used. They are applied mostly at a diagonal angle (upward to the right) but are not all applied at the same angle, which reflects the disorder and despair in Quasimodo's heart.

In terms of the artist, there is an emotional attachment that drives the focus of the artwork. The viewer may reflect upon it and arrive at a completely different interpretation. This is both the wealth and the power of abstract painting; it makes room for subjective interpretations. The scientist means to propose one outcome to a problem, whereas an artist means to give multiple interpretations of an object.