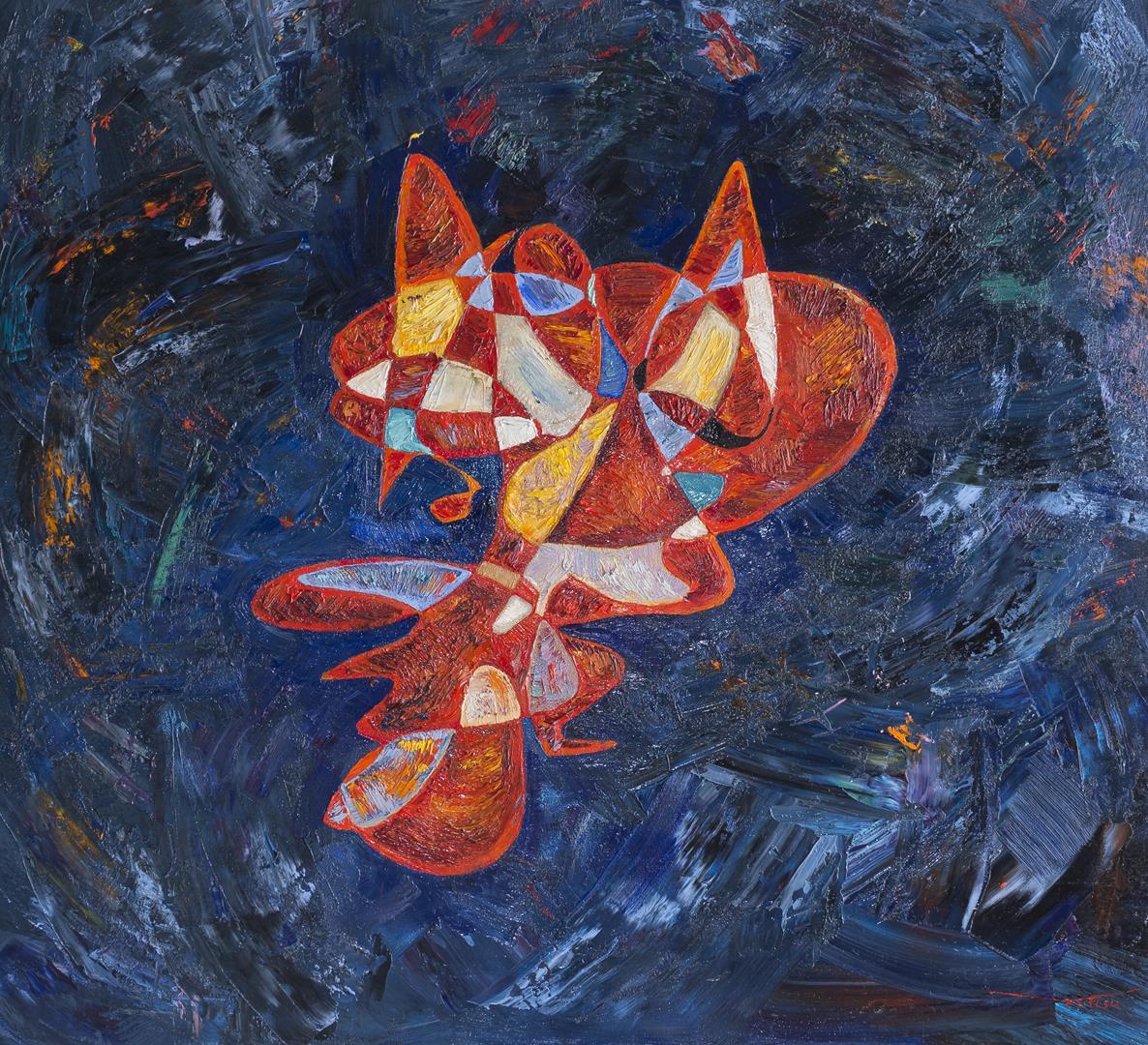 Virtosu’s paintings of women many adore, sexy and seductive Marilyn Monroe do not embody the idea of extraordinary fame and glitz as some would assume. Considering that this representation of the actress is done recently its obvious that the painting carries an ominous, much darker undertone. The portrait with the blue background stand not only as a symbol of American cultural history but also as a reminder of its obscure, and brutal side.

In 2017, Virtosu embarked on what would be an increasingly significant category in his output, the head-like portraits of Great World Personalities. That year, he painted – in his studio in Belgravia – sixteen large paintings that demonstrate the advancement of his artistry. Although the title of the present work is Marilyn Monroe, this forceful painting presents the iconic and tortured story of the actress.

Despite the fact that the centerpiece occupies a significant space in the painting and is brightly colored, the oil painting is sad. The centerpiece is orange, interspersed with yellow, a light blue, silver egg-shell white with two minuscule strands of black. These colors seem to beam hope, innocence and confidence. The centerpiece is standing straight, suggesting confidence and, possibly, fame. When the gaze shifts to the right corner, we see a shape reminiscent of a crash. This leads one to think of Monroe’s life heading towards a crash. She is surrounded by unsettling swirl of blue, some discernibly metal, seems to be sinking into the vortex. The artist appears to be suggesting that Monroe had something demonic. Should we step away from the cult of celebrity which surrounds Monroe to this day and has catapulted her into the status of a Legend, one will find that she was somewhat demonic. She captured hearts at a glance, had the power of millions of adoring fans around the world behind her and married and the powerful were drawn to her. Monroe never hunted a man. From Mafia bosses to a sitting president, men were rendered weak and could not withstand the call of the sirens. She was a gifted comedienne whom the camera adored, a luminous and incomparably magnetic screen presence. She had it all, yet her career and life came crashing to a tragic halt, a Cinderella story gone horribly wrong.

Virtosu’s painting here is unleashed and urgent, unencumbered by any stodgy deliberation or revision. The artist poures his fixation with mutilation, his indistinguishable preoccupation with drama and the history of twentieth-century. Mediated by the vicissitudes of biography, Monroe is an incredibly pioneering and unique work that marks the very formation of Virtosu’s painterly genius. Signaling the terrible and silent metamorphosis from inchoate bestiality towards the realization of nightmarish reality, with these works, Virtosu shifts from mythological creatures to portraits probing the depths of humanity.