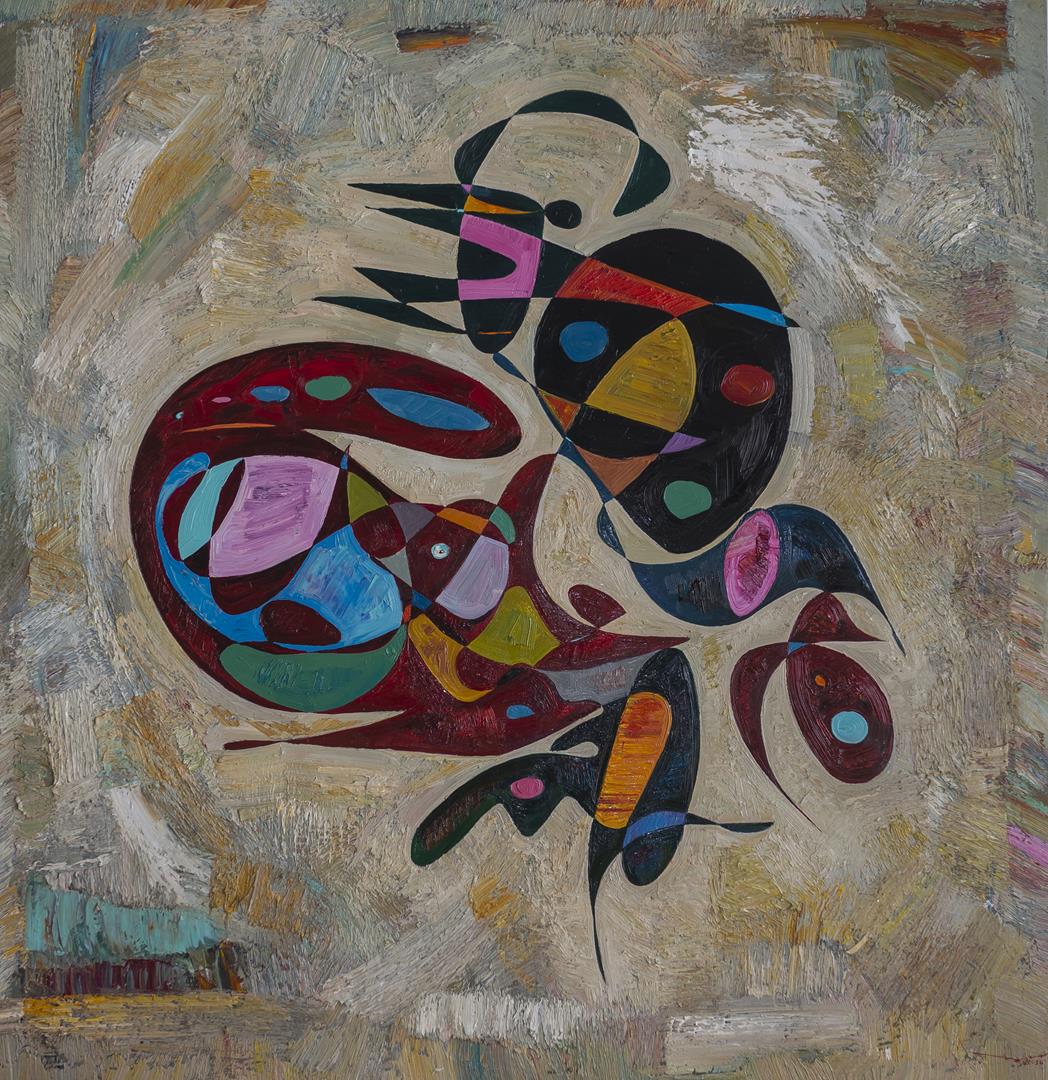 There are real pleasures in experiencing a single almost infinite world composed entirely of sound, and the fact that music is addressed overwhelmingly to a single sense does not seem to limit its appeal, power or cultural achievement. It may seem odd therefore to suggest that pictorial art should not aspire to the condition of music. The musical simile can seem a good way of explaining the operations of abstract painting, especially when colour is emphasised. However, the painting has traditionally offered the eye something like the audio-visual experience of the cinema rather than seeking to immerse the viewer in a single world. The world of the form and the colour world are both active in the experience of painting.

Colour and decoration have always been able to form a comfortable alliance of mutual dependency in Virtosu's work. The two-dimensional structure can be designed and filled with any combination of hues whose chromatic relationships may be striking, discordant or harmonious. Virtosu's pattern which the colour fits has its own visual characteristics. It may be florid or reserved, busy or minimalist, or anywhere in between. It is figurative and abstract. The work has certain dramatic tension, as seen in the active usage of dark colors - conquering the sky has always been associated with passion and danger, it’s enough to remember the myth about Daedalus and Icarus. The palette emits the sense of determination and struggle. This ambiance is supported by the character of the drawing: Virtosu’s style in this piece calls up parallels with the fusion of Surrealism and Abstraction, developed by Juan Miro. The artist applies biomorphic curvature, accentuated expressiveness, the intersection of shapes is turned into a colorful mosaic. The composition has an upward dynamic, created by the emphasized lightness of the lower part: the drawing seems to grow out one single point, like a plant, and expand greatly, then almost vanish in the upper part.

The disintegration in Flying Man allows to achieve the impression of levitation and it also makes the work closer to a musical piece. Music is made not merely and solely by the sounds, but by the pauses between them. Similar, void, or the so-called ‘negative space’ between the elements of the design, is not just a ‘background’ - it is an active participant in creating the visual space of the image, giving an intensive result with the help of the minimum of artistic means. Just like the airflow, which is invisible but essential for flying.

A careful public will see that Flying Man by Gheorghe Virtosu isn’t an image of a fantasizer, but of the person of action. We always imagine this process as the essence of joy and liberation. And for sure, it’s true, however, it is important to remember that birds flap wings in order to fly, so it’s not a passive process. "When once you have tasted flight, you will forever walk the earth with your eyes turned skyward, for there you have been, and there you will always long to return", Leonardo Da Vinci.

The public interest for Virtosu's work is that it offers a critique of habitual ways of seeing, ways that are blind to anything but narrative, messages, subject matter, reference, imagery and decoration. In the Flying Man circumstances however the relationship between viewer and painting, the critical distance that exists between them in the encounter, is significant as it collapses the difference and brings the viewer closer to the action.