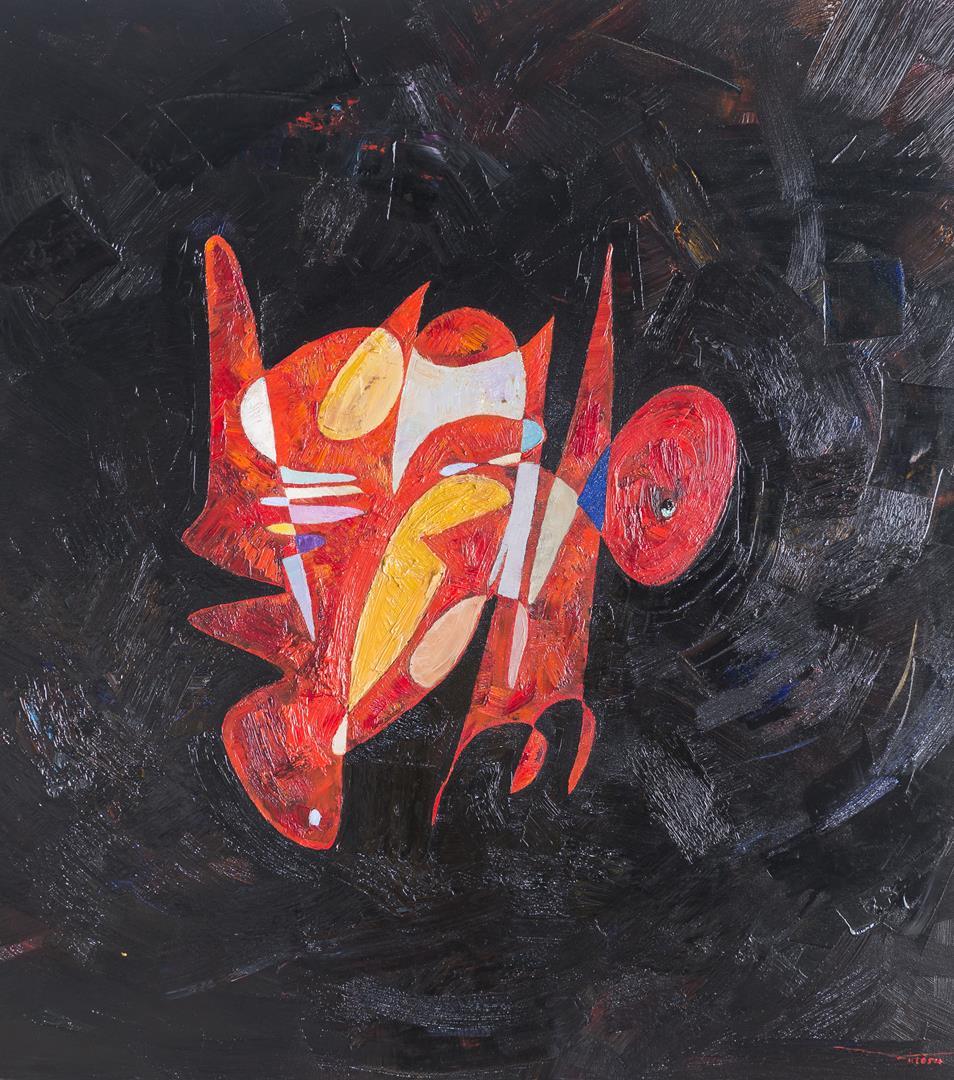 "We take for granted that something unique is self-content and self-contained, something like no other. Going back to the origins of my paintings, it all started in a prison cell in isolation, with Loneliness as my only companion." - Gheorghe Virtosu.

Bursting forth in a fury of radiant color and ferocious mark making, Elvis Presley from 2017 is a compelling testament to Virtosu’s singular and hyper-individualized mastery of expressionistic portraiture. A paradigmatic example of the artist’s most iconic motif, the visage of the present work is utterly mesmerizing in its emotive intensity; fixing the viewer with the ferocious gaze of its red and yellow figure that demands recognition of Virtosu’s instinctive abilities as one of the greatest draughtsman of the Twenty First Century. In its searing and totemic rendering of a Great World Personalities, Elvis numbers among a seminal group of intensely worked and re-worked portrayals that the artist created as, at the start of 2010, he began his extraordinary ascent to the highest echelons of Contemporary art.

Elvis Presley is the king of rock ‘n’ roll and one of the most influential people of the 20th Century. The legend has inspired the world. Elvis is well known for bringing rock into the top with his lively shows and animated dance moves. He had an iconic look that certainly helped him make it happen. While many great things are known about him, the lesser known, mysterious aspects of his career and private life are to be discovered in the present visualization.

Rendered with ferocious intensity, the strokes of Virtosu’s preferred oil resolve to reveal a figure that, by sheer painterly force alone, utterly refutes the two dimensionality of the page; rising wraithlike before us. Much of the canvas is black, allowing only for an isolated figure in red and yellow. The drama of this corporeal expression is greatly intensified by the artist’s complex framing of the composition and the many facets that define an uneasy sense of flux and unknowable dimensions within the canvas. Virtosu’s overlapping linear schema here act as cage-like space frames that enclose Elvis figure inside its solitary nightmare.

Belonging to the very earliest paintings centered on the locus of the existential issues, this extraordinary painting marks the inauguration of Virtosu’s major subject matter. Immediately presaging his magnum opus Great World Personalities paintings produced the same year, this work occupies a critical position at a moment that would come to define Virtosu as a major artist.

Inspired people do not give up, rather they are encouraged by the challenges that life frequently presents.

read more
Inspired people do not give up, rather they are encouraged by the challenges that life frequently presents.