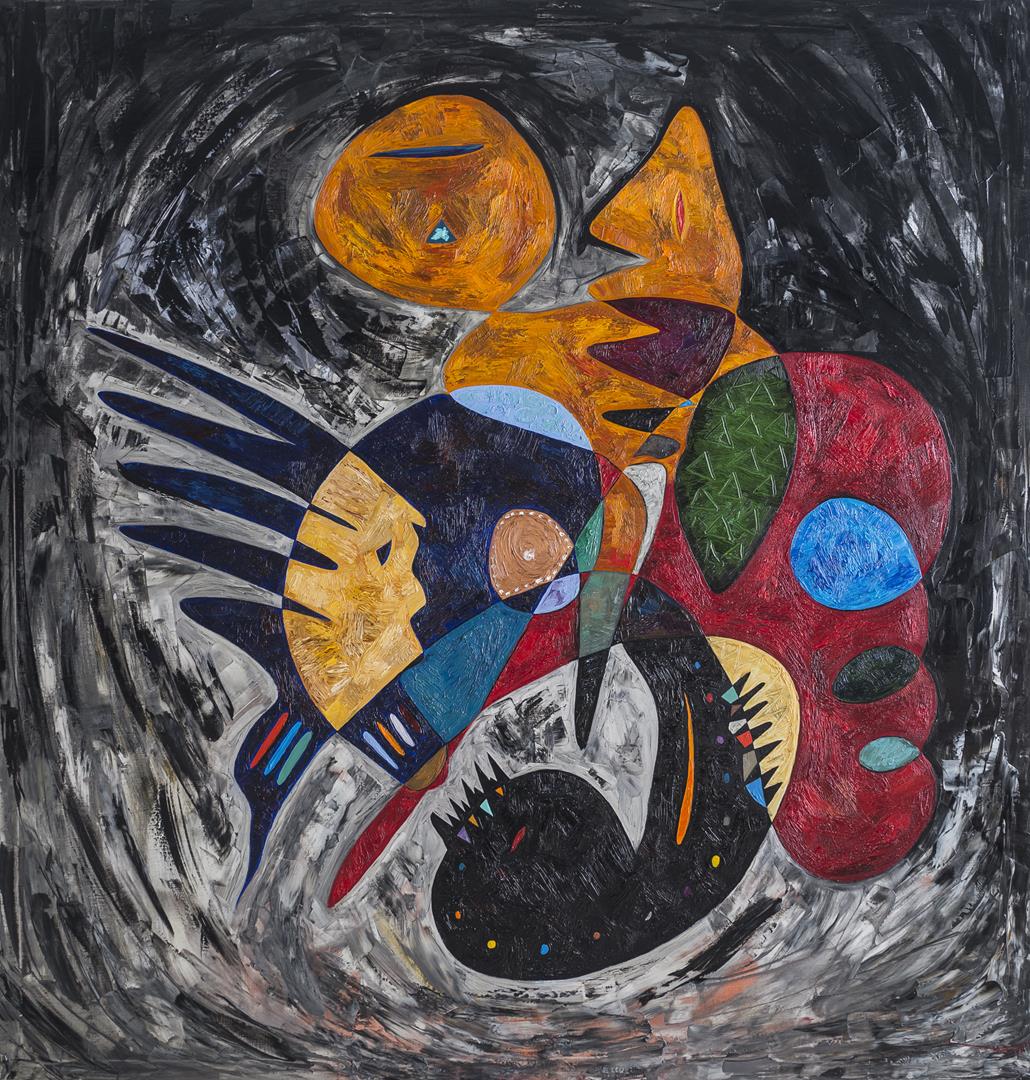 The abstract painting canvas is bold, the brushstrokes are heavy, and the colors are deliberately selected for effect. The entire bottom foreground, reaching to the full length of the left of the canvas is painted using several shades of grey, some of which emerges as pure silvery hue. At the topside of the left of the painting, four silver spikes reach out to penetrate the centerpiece but only three are successful. Furthermore, at the top center of the painting but veering to the left, a silver and grey object, also with a spike, appears to be crushing the centerpiece.

The bottom of the abstract art work is powerful. It is primarily in different shades of grey, even running towards the back, and interspersed with orange. This area of the oil painting appears to depict, in some parts, iron or steel rods. In other words, it is not static, and it is not a background but immutable to the entire abstract art work. The bottom of the canvas depicts a cyclic motion, akin to the eye of the storm, a vortex or a whirlwind. To achieve that effect, the abstract art master uses harsh and bold brushstrokes, enabling one to see the beginning and witness the end. When seen as either of the three mentioned visuals, the painting assumes a menacing form.

The centerpiece negates the menace which was communicated by the flow and direction of the heavy brushstrokes. It is comprised of three independent, yet intertwined form. The bottom is black, and the head is in a downward position. Small spikes are jutting out from the both the body. The figure itself assumes a fetal position. On top of the small back figures, there rests on the right a large red figure. It is dominating the canvas and may be described as a head. The green at the end is visualized as body art. As for the figure, its three oval shaped forms, can be seen as the eye and the lips. The first shape is turquoise blue, the second which is dark grey but not black, can be seen as the nose while the smaller bottom is in greenish turquoise and may be interpreted as the mouth. Whether they are or are not any of the stated, the blend into the painting and create an extensive pallet for the display of the power of colors. The last form is blue, interrupted by a gold-like yellow from four blue and blunted spikes emerge.

All that is left to say is that this is a highly unique and extremely beautiful painting which displays the true artistic talents of its creator.