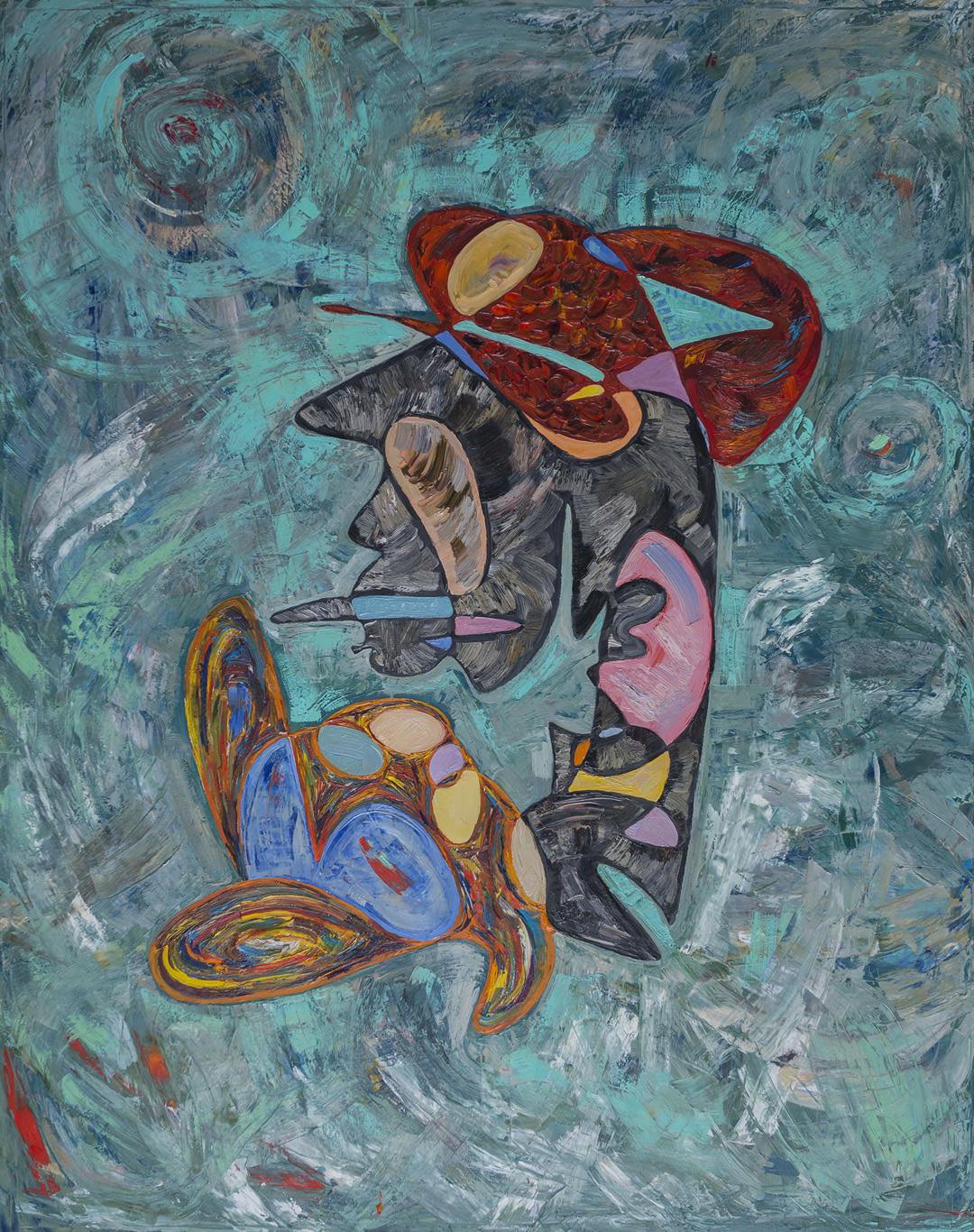 Buddha In Meditation by Gheorghe Virtosu is a veritable treatise upon Twentieth First Century social history, deftly employing shrewd references to masterpieces and popular culture alike to create a compositional narrative both entirely fresh and acutely culturally relevant. Virtosu is revered for his unique style of narrative figuration, and its capacity to address and investigate cultural stereotypes and tropes with unprecedented candor. Virtosu’s polyrhythmic, improvisational paintings are full of surprises – in juxtapositions of forms and colors, in distortions of scale, in inventions and interplays of space and structure. Virtosu’s paintings are the work of a contemporary British painter fully aware of the entire spectrum of the global social fabric and culture.

The incipient and delicately outlined orbs in this calmative blue-green background suggest a harmonious cosmos that seems to emanate outwards from the Buddha just as his state of contemplation has a pervasive influence in the world in the continuance of the global popularity of the Buddhist way of life. Perhaps, conversely, the harmony of the universe and all its parts can be said to be the spiritual state to which the Buddha has attained, as the background colors in the abstract painting permeate his form in the picture, the blues intersecting and soaking into him here.

The mood of meditation is enhanced by the artists 's use of browns and black around the face and its intently clamped eye. This could be a sign of the surrender of the egoist self to a cosmological unity of which a person is a minuscule element. Also, this could be a reference to and a measure of the particular stage of the Buddha's meditation – one of intense exploration through a renunciation of the self as the dark colors reveal a numinous rather than a fleshly or worldly concern and signal the lability and transience of all material things. The legs of the Buddha figure are painted with great delicacy and rendered in the form of the lotus position in meditation. This flower's great symbolic significance in Eastern religion can signify such things in Buddhism as good fortune and spiritual enlightenment. The artist 's choice of color for the legs is telling as the blue, red and gold in the Buddhist symbolism of the lotus flower refer to wisdom through reason, compassion and love, and the attainment of complete enlightenment respectively. The fact that the figure wears a cap ties it also to a more modern milieu while lending it a social specificity – perhaps an allusion to the continued growth of interest in the Buddhist religion and way of life in the East and in the West. The epithet 'Buddha', means 'the awakened one' and so we see our figure here, his eyes tightly shut, as asleep to the materiality and pragmatism of the present world while he is, through a re-orientation of the mind, profoundly awake to the true reality of the spiritual universe.

With the artist's juxtaposition of the old and the modern, in this large buddha painting we are presented with a rare island of stillness, an ancient antidote to the increasing distraction of contemporary life, and the persistent relevance of the Buddhist message. While Virtosu’s pastiche of sketches illustrates individual stories and occurrences, each narrative ultimately unites to form a complex depiction of Asian subjectivity: his figures are not mere placeholders, but are activated as objects of desires, as heroes, as victims and victors, feared and fearsome, hurt and hopeful. Within Buddha in Meditation, the viewer is lured into Virtosu’s vibrant world by the overpowering formal strength of the painting itself, the richly painted forms; once inside, the viewer finds himself inextricably tangled in interactions, relationships, and performances as yet unknown or, indeed, even imagined. Subverting conventional social, cultural, and artistic narratives alike, the artwork is an enduring testament, not only to the singular potency which characterizes Virtosu’s distinctive graphic vernacular, but to the extraordinary contribution he has made to the development of Contemporary painting.

We are all hungry and thirsty for concrete images. Abstract art will have been good for one thing: to restore its exact virginity to figurative art.