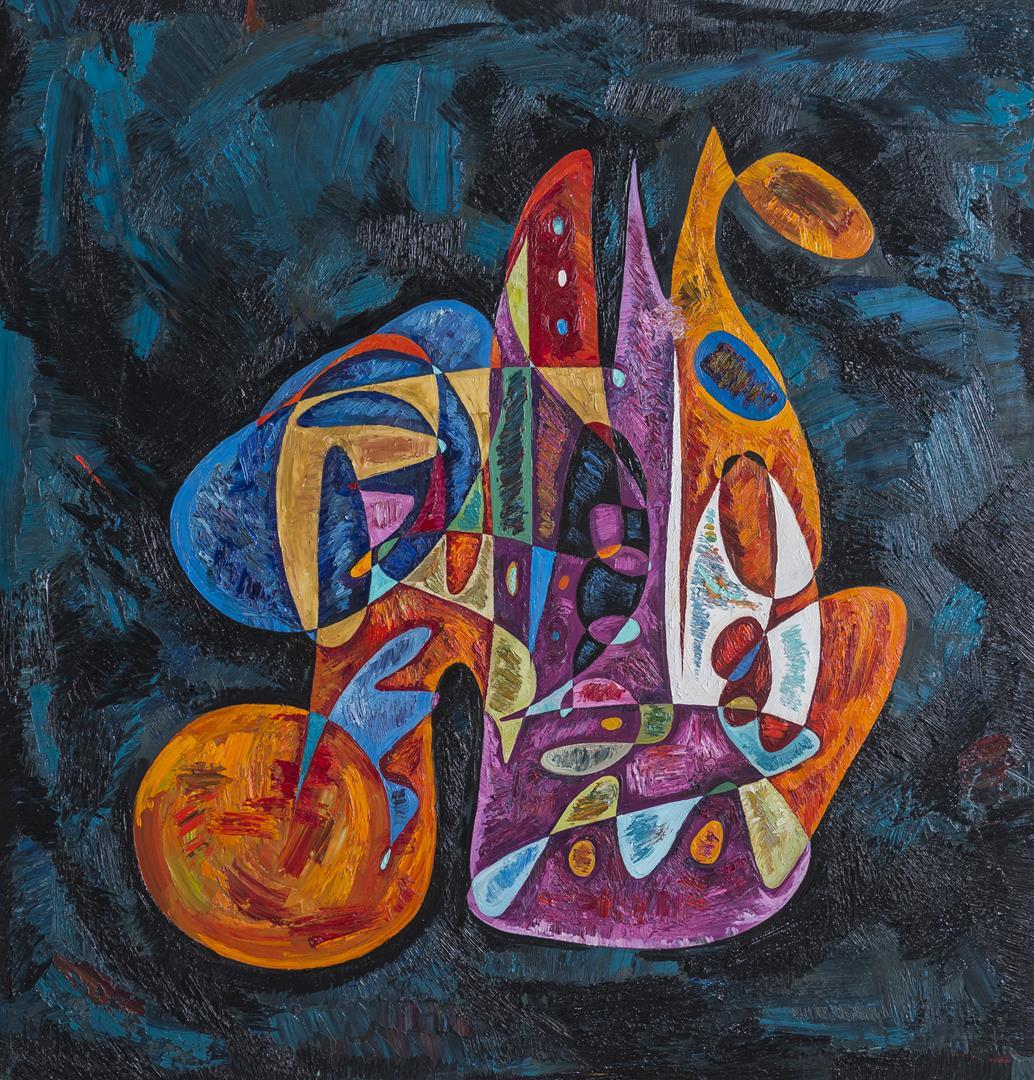 Banishment Of Nun Sisters by Gheorghe Virtosu resembles the chaos, in which all the elements are interrelated. The picture’s central figure looks like a jigsaw puzzle with numerous pieces, perfectly fitting each other. In the abstract art work, Gheorghe Virtosu employs a great number of hues, which vary in tones and value. Hence, both warm and cool colors intertwine in the painting, making it vibrant and saturated. Due to the contrasting tones, the abstract figure in the foreground stands out from the muted blue background. The shape of the subject matter is rather curvaceous, as it has prevalently flowing, thin, and curved lines. In addition, the balance is noticeably asymmetrical in the picture, since its right side looks heavier, due to the larger amount of colors and a greater variety of pieces included.

"The debasement of values is a shame, not only because the resulting cynicism poisons the cultural well but also because it wastes a great opportunity. Values can set someone apart from others by clarifying its identity and serving as a rallying point for followers." - G. Virtosu.

Virtosu’s work is dedicated to the real exclusion of Sister Jeannine Gramick from the School Sisters of Notre Dame in 2000, due to her support of the LGBT community in her speeches. Previously, Gramick had received a number of warnings from the Holy See, concerning her activity. Nevertheless, she, along with Father Robert Nugent, continued to conduct classes on homosexuality and founded the New Ways Ministry in 1977 (“Notification Regarding Sister Jeannine Gramick”). Eventually, the Vatican forbade the two to mention homosexuality in their speeches and written texts. Moreover, they were banished from the New Ways Ministry (“Maryland Nun Faces Banishment”).

The abstract painting reflects Gramick’s discord with the Vatican, concerning her right to speak and defend the sexual minorities. Consequently, the painting represents the timeline of the scandal, which begins at the bottom left corner of the abstract figure. There, a mostly homogeneous sphere with different shades of red and orange implies that Gramick did not have troubles in the beginning, since the Vatican did not start to criticize her activity immediately. Yet, there is a small triangular blue mark that must symbolize the interference of the Vatican. Further, marks of various colors intersperse with the monochromatic backgrounds of the other small pieces, which stand for the constant disagreements between the Sister and the Church. Ultimately, the scandal subsides and ends in the upper right corner of the canvas. There, one can see a small orange oval that is falling away from the whole figure, disrupting its structure. This represents Gramick’s final defeat, when she was banished from all Catholic organizations.