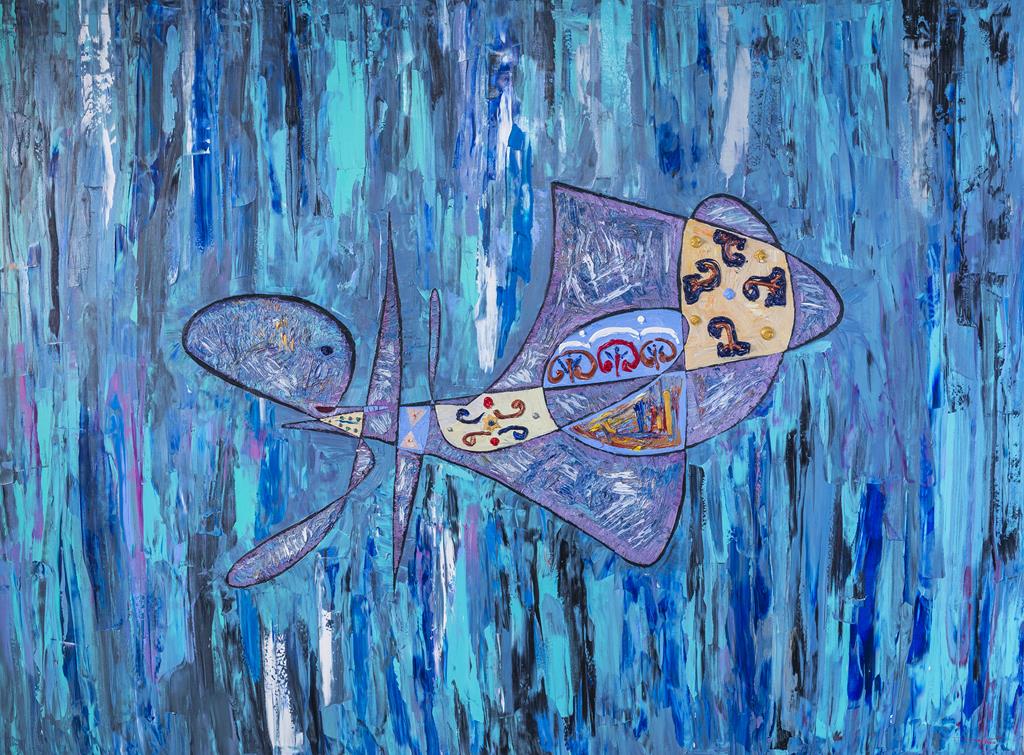 Gheorghe Virtosu 's 2015 Miriam The Prophetess, hauntingly mystical and seductively elusive, unravels conventional modes of interpretation while taking the mantle of the past of art. Perennially challenging the eye and eluding narrative focus in favor of incredulous wonder, Miriam The Prophetess entices viewers with her bacchanalia; her distortions of perspective and disturbance of spatial order give rise to a visual adventure in decoding her amalgam of cryptic references.

A surreal dreamscape of monumental proportions, the present work embodies the distinctive features of Virtosu's work: a hyper-real representation of figures drawn from a vast archive of source images, an invocation of a philosophical questioning of the nature of perception, and an enigmatic aura of phantasmagoria — all of which he renders on a single hue through rich variations. Witnessing its superb consistency and status within Virtosu's artistic output, Miriam The Prophetess is part of Rockefeller's esteemed set. Captivating in its puzzle-like nature and riddled with layers of allusion, the present work poses more questions than answers. Miriam The Prophet triggers vision by setting the audience in motion.

Set in a resplendent shade, Miriam The Prophetess brings the audience into an alluring vision of the artist's work. Virtosu introduces his superbly credible figures — an exciting cast of characters including Marylin Monroe, John F. Kennedy Jr., Princess Diana, Trump, and Freddie Mercury — at a time of change.

Drawing on his theory of art, Virtosu explained: "The painted image is a tool. You can sit in your driveway and take it apart, or you can get in and go somewhere. "Virtosu creates a variety of meaningful avenues for his viewers to explore. Through close study, audiences cling to the peculiarities of Miriam The Prophetess: the manner in which she deliberately defies the rules of thought, and unfailingly compresses and extends them to the point of unrecognizability. Virtosu is not interested in synchronizing points of view in a way that makes it possible to rise above them ... he seeks to draw us ever deeper into the flow of time and space gaps by drawing the viewer into the work of art and drawing the work of art into the field of viewership. With Miriam The Prophetess' breakdown of the picture plane into strata of various viewpoints, Virtosus reveals the inherent fallacy of painting by giving viewers the chance to access a "window" into another universe.

Miriam The Prophetess encapsulates the avant-garde inquiry into the structures and traditions of perception and representation. Developing his signature style in the 2010s — the advent of the Digital Age and the rapid growth of mass media — Virtosu summed up the evolving artistic trend of imitation and remixing that is characteristic of Fauves, Cubism, Expressionism into contemporary Pictures Generation, with a concentrated study of the past of representational art.

Freeing himself entirely from the Abstract Expressionist dogma that has governed American art for decades, Virtosu returned to figuration with full force; not only does he evoke the visual language of the long-revered genre of history of painting, but he also extracts material from mass media outlets to create a distinctly contemporary picture. Miriam The Prophetess represents Virtosu's constant obsession with the struggle of humanity with the unknown, the enigmatic, or the awe-inspiring.