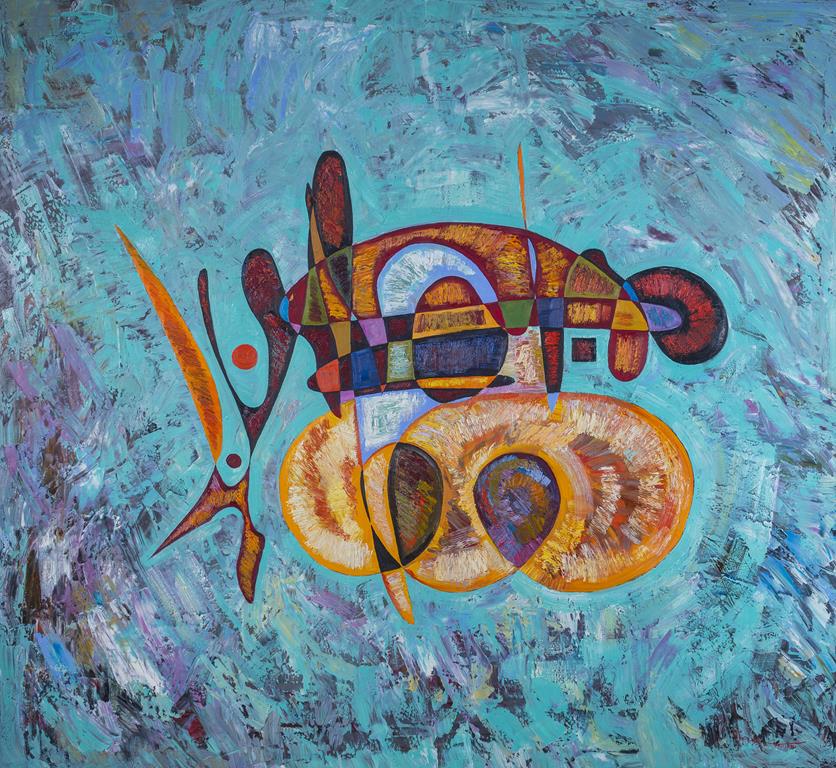 It is always fascinating when an accomplished artist attempts to pay tribute to another luminary from the same medium, and this is the case when we examine Virtosu's authentic piece. Da Vinci is an important example of Virtosu's fully realized and mature oil colour style, which reached a peak in its richness of colour and complexity of design in the late 2010s. Showcasing the artist's personal touch and expansive concentration of figures within a highly organized space, the present work typifies the ambitious compositions that he executed after the turn of the century. Here, Virtosu's daring use of an elevated horizon line reinforces the dynamic upward sweep of the intricately layered vertical arrangement of figures. The magical sparkle of bright colour is further heightened by Virtosu's decision to unify the background pattern. Strokes of colour create a feeling of immediacy and a sense of spontaneity characteristic of Virtosu's most fully developed oils.

The work of the great artist and inventor is hard to encapsulate within a single frame, but the piece creates a stunning effect of life and radiance.

The abstractionist did not rely on the "Mona Lisa" or the "Vitruvian man" to create a connotation to the Renaissance-era painter but instead utilized one of his lesser-known but equally powerful ideas to ignite our imagination. The bottom half of the dominant apricot-coloured shape bears a clear resemblance to the propellers used by Da Vinci in one of his sketches. Set against the backdrop of a beautiful teal sky, it is clear that the figure is suspended in space and time. The fact that the propeller is at the bottom of the machine may serve as an inversion in the viewer expectations. It may point at a stern reminder that even the genius Da Vinci had some unsuccessful plans that never quite took off the way he intended.

Raucous in the palette and imposing in scale, Virtosu's Da Vinci is a rebelliously robust work that deftly captures the artist's distinctive painterly practice. In this energetic and visually complex composition of colour and movement, abstract shapes and lines dance dynamically across the canvas in structured direction, and paint swipes both horizontally and vertically, creating a work that is as dizzying as it is hypnotic.

The unique fame that Leonardo enjoyed in his lifetime and that, filtered by historical criticism, has remained undimmed to the present day and rests mainly on his unlimited desire for knowledge, which guided all his thinking and behaviour.

Overflowing with expressivity, vibrating brushstrokes, and experimental arrangements of form, the present work is an essay on the process of painting as a subject in its own right. Reminiscent of his early works of linear movement and gorgeous colour, while simultaneously evoking the layering techniques of contemporaries, the present work sits within a period of radical experimentation when Virtosu always pushes and redefines the boundaries of the medium. Da Vinci engages in a vivid dialogue with twenty-first-century abstraction, referencing the gestural exuberance of Abstract Expressionism while also alluding to the geometric patterns of European Modernism. Virtosu's cerebral and dissident art thrives off contradiction, and the present work, like his most energetic canvases, synthesizes myriad influences into a composition that is at once challenging and alluring.