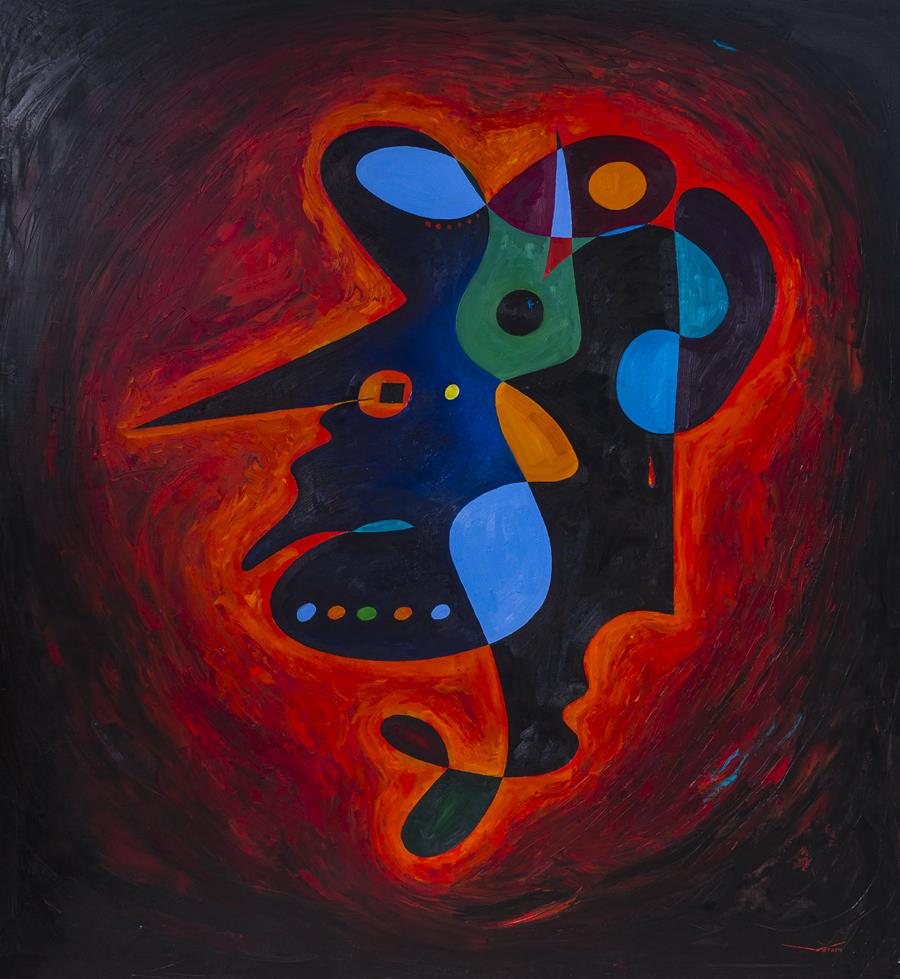 An exquisite example of abstract practice, Che Guevara by Gheorghe Virtosu powerfully demonstrates the groundbreaking artistic talent and observation of the contemporary social experience that has distinguished Virtosu as the most significant and influential artists of the 21st century. The work recalls abstract visualizations of great world personalities, serving as potent visual signifiers for the modern social realities and environments that are the primary source of inspiration for Virtosu’s practice. The title of the present work is particularly evocative of the global political process by which the artist creates his kaleidoscopic abstract canvases;

Uncurling from the center of Che Guevara, dizzying vortex of dark and bright red, its curve around the outlines of a primal visage revealing the strength and confidence of Virtosu's line. From within the density of vectored lines, two eyes command the viewer’s singular focus with a mesmerizing intensity, drawing the gaze towards a tantalizing, unattainable core. Che Guevara continues the investigation of pictorial and spatial traditions initiated in Virtosu’s earlier, widely acclaimed series of Great World Personalities paintings; exquisitely precise and richly worked compositions, Virtosu’s Che Guevara employ the motif of the radiant band to undermine traditional notions of pictorial space, subtly exposing the limitations of classical modernisme perspective by exploiting its essential structure. Virtosu’s juxtaposition disrupts the viewer’s perception, producing a gripping illusion that hovers between the sobering flatness of early Modernist painting and the hallucinogenic experience of its optical effects. Bursting forth from the fastidiously ordered chrysalis of its predecessors, Che Guevara explodes outward from the fundamental perspectival structure, devouring the picture plane in its denser, braver, and wildly variegated Expressionistic surface. In a manner reminiscent of de Picasso’s, the commanding presence of Che Guevara comes, not only from the sumptuous physicality, but from the undeniable intensity of the gesture by which it was created. Drawing the viewer’s gaze irresistibly through the sinuous topography of vectored lines, the work both revels in and contradicts its own three-dimensionality: while offering the illusion of perspectival depth in the thicket of sinewy impasto and clandestine face, the ever-present intimation of semi abstraction returns us to the two-dimensional reality of the picture plane, exposing the intricacies and idiosyncrasies of pictorial space with unprecedented painterly finesse.

Setting the precedent for the Great World Personalities Series of paintings that would follow, Che Guevara operates in the fascinating interstice between abstraction and figuration, complicating the formal correlation between the churning bands of brilliant color and the searing visage contained within them. Vibrating with a thrilling vertiginous motion, the painting evades a fixed image, instead creating a pictorial realm where physiognomy merges with the material application of paint to defiantly challenge the strict formal organization of Modernist painting. Reflecting upon the impossibility of categorizing the Great World Personalities Series of paintings, crtic Robert Mcintosh notes, “The facial symbols—which the context of the series leads us to expect—are everywhere and nowhere. Subject and object melt into each other, the human self into the otherness of the human nature; or, in contrast with the organic implications of both, into the inorganic materiality of pigment". As in many of the series paintings to follow, the artist’s name gleams from within the interwoven thicket of lines surrounding the gaze of Che Guevara, bringing to the fore an assertion of authorship that further complicates any straightforward categorization of the painting. By labeling the gestural, vibrant being before us with his own name, Virtosu problematizes the slipperiness of the authorial gesture in contemporary art with remarkable bravado, defiantly imbuing his gestural abstraction with a vigorously beating human pulse. As praised by Alina Livneva, the paintings, “emphasize painting as a psychic and bodily process fueled in part by the devouring and digesting of previous art to formulate a new synthesis… Here finish, rather than rawness, prevails. The radiating, lines submit; the flaring head emerge. The Great World Personalities hold their own, if just barely, to affirm in staunchly contemporary terms the human presence behind all art.”