Humanity and Inhumanity as Archetypal Creatures oil painting
Do you consider
yourself
adventurous?
ART COMPASS Issue 28

This piece describes the belly and the main body of Virtosu's figure as signaling balance and harmonious peace as oceanic blues and terrestrial colors are settled in an organic structure. The figure is surmounted by perhaps an all-seeing bird that is crowned with its gift of prophecy.

However, coloring in this oil painting is that of an earthy brown seems to cascade down the length of the figure on two sides beyond its body. This can be interpreted in at least two ways.Either that the wisdom and foresight of the bird are by no means exclusive to it and that a new total war is forecast by many, or that wisdom – far from prevailing – will become embroiled in and vitiated by the coming conflict.

The integrity and majesty of the bird's upper posture degenerating the further the eye of the viewer lowers.
In further support of the vitiation or helplessness of foresight, a cursed gift of Cassandra is the violence with which the blue and brown spike pierces the breast of the bird, a visual marker of the inescapability and mutative agency of the force of political circumstance. To the left in an ominous black, blotted with furious and sanguinary red, is a figure stalking upon the central figure. This is perhaps a conflation of all the perceived threats to civilization – be it terrorism or the warlike dispositions of nations in the struggle for ever-diminishing resources. This figure's hackles are raised as it marches on the citadel of the main figure, which now signifies culture, reason and the disposal towards peace which propitiates the cultivation of these. 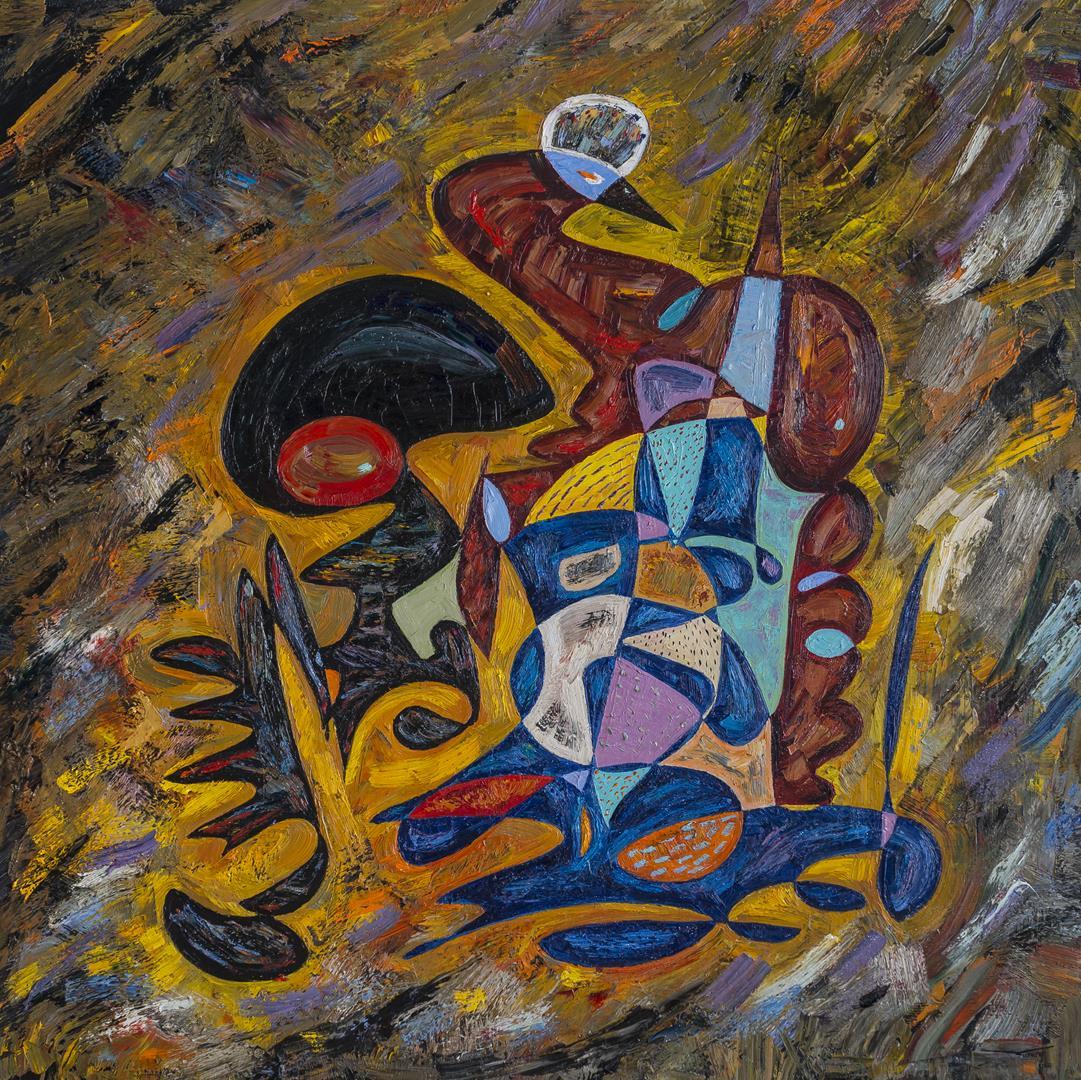 Within the bellicose figure seems to be another in fiery gold that presages destruction. Yet, if we see it with its arms raised rather than emitting the flames of devastation, and if we see the cavity in its 'head' as a mouth, this figures combines the roles of hostile harbinger of war and the affrighted raiser of the alarm, whose fire becomes a piercing scream of suffering or the anticipation of suffering.The head of the black figure on the left of this contemporary artwork is in the shape of a helmet, perhaps even a mushroom that is a doleful reminiscence of the devastation inflicted on Hiroshima and Nagasaki in 1945. By this device, the contemporary artist transplants history into the present and the future – almost to indicate a tragic circularity of time and the quandary of the ubiquity of war and loss no matter how progressed or cultured society is held to be.