Oil Painting marking the antithesis of the human

The Anatomy Of Behind Human Mask canvas
Do you consider
yourself
adventurous?
ART COMPASS Issue 28

In Behind Human Mask oil painting there is a portrait perhaps of a despot perhaps of a deceiver. The mask, on the right-hand side of the figure, is peeled away to reveal a cacophonous and distended mass beneath (to the left).

The human is cast off like the slough of a snake and shows all the civility, compassion and altruism that we associate with being human to be a farcical charade.
This figure's character is unveiled with lines crossed in a complex of agitation, even violence. This agitation is further developed with islands of clashing colors and the forms of barbarous non-shapes that together mark the antithesis of the human, that is the monstrous and the animal.

Although this oil painting composition shows a diametrical polarity – the infernal and the human – this is undermined by the facticity of the mask and we rather see a unity of ill will beneath. This could suggest that all the human virtues form a thin film over the heaving turbulence of a powerful animal that can pierce and dispense with it. Humanity forms a brittle patina liable to be exploded.

Yet we have also the internalization of what human beings, societies, and cultures persecute as anathema: The Other.

The object of hate is not here another person, nation or culture but it is within the human subject. 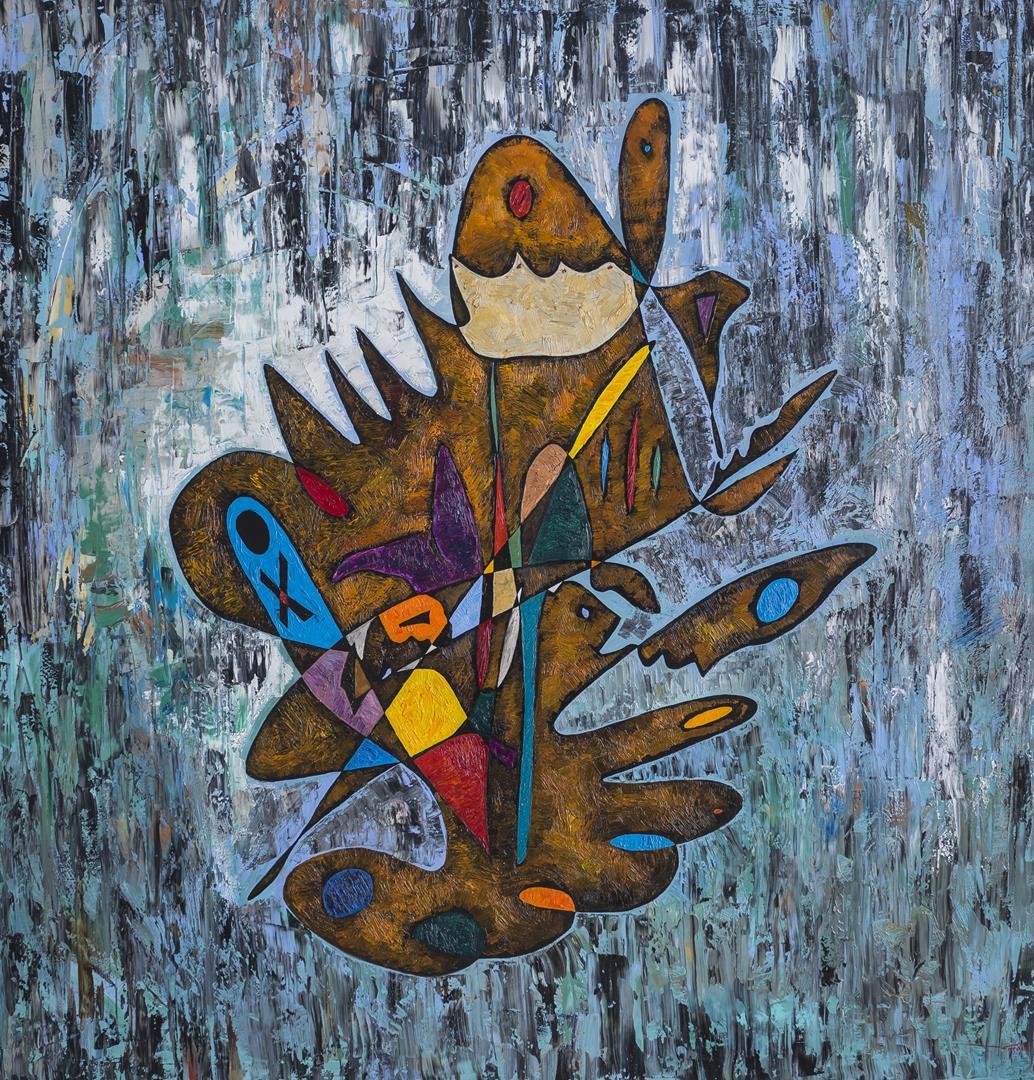 Depending on whether this subject-figure has specificity, i.e. is a particular human, or is an epitome of humanity in general, various readings can be made. What some readings will have in common though is the theme of a divided human subject and the object within.But this internal division is not even or tidy. A great welter of anomie and subversive motivations swells up behind the mask, perhaps the only residue of human affect or law being the 'X' in a turquoise cartouche on the left which marks a forbidding by law be it social or divine. So the human veil is beleaguered by a tidal wave of the macabre that becomes or is a wrong being of violence, as the sharp teeth of the upper left evoke.

The general neutrality of the prevalent brown could indicate the absence of morality or the middle ground and moment of moral choice.
But this figure with its sprawling forms and violent angles has either disposed of morality if it became monstrous or, if it simply is monstrous, was never conversant in the language of morality. In the former case, it incites censure and derision, in the latter case it troubles the faculty of understanding.