The Secrets To Albert Einstein canvas
Do you consider
yourself
adventurous?
ART COMPASS Issue 28

The artist uses shapes, colors, forms, and gestural marks to achieve its effect of passing the message coded in Albert Einstein oil painting to the audience. Either a partial abstraction of a head or a symbolic notation on the restless mind of the seminal eponymous genius, the figure at the center of Virtosu 's painting is equivocal.

We need not decide between these two options because they converge in the ebullient energy of the oil painting, which is effected by both brilliant luminosities of crimsons and golds.

The superior warmth of the crimsons of the figure or head foregrounds it literally and figuratively for our attention but not unproblematically as interior tensions occur, introduced by the dark recesses of the figure. These tenebrous moments within an integral form could signify both the mystery of the workings of the great man's mind and upsets – within a figure – the traditional art-historical polarity of figure and ground, as the figure both advances to us and recedes from us. 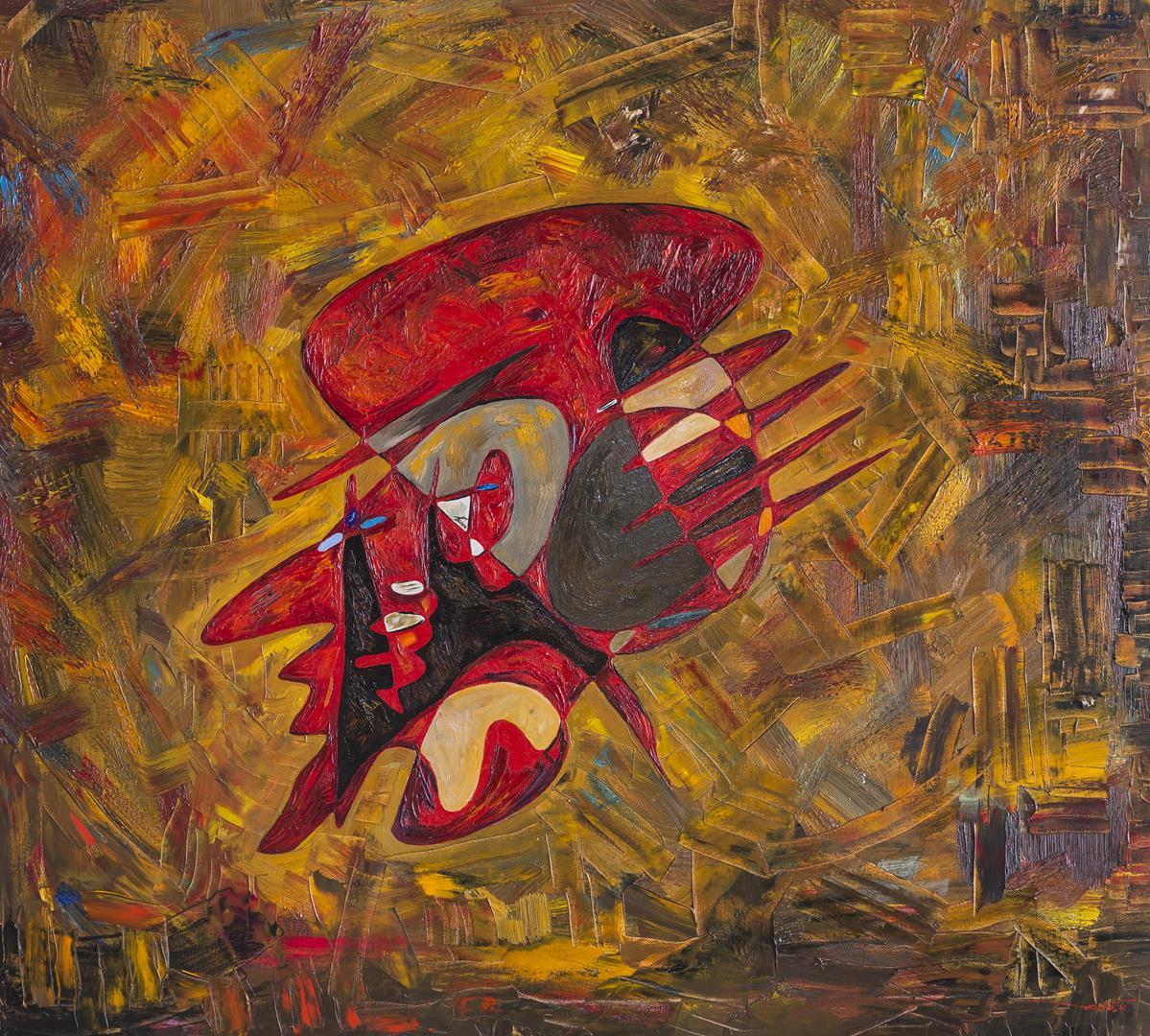 In the aureate background, we can discern perhaps the fragments of buildings washed over in thick impasto. These buildings appear to be clothed in a classical style and could refer to the traditional centuries-old science of Isaac Newton which Einstein would confound with his theories. It is therefore fitting that the figure is either –

a symbolic manifestation of pure animate mind or a partially figural and partially abstract depiction of the head – occurs as explosive energy that characterizes Einstein's revolutionary role in the evolution of science.

Also, the classical fragments in combination with the frame-within-a-frame of bricked lattices of gold further counterpose the man from the tradition, as the golds appear quiescent in contrast to the vibrancy of the central figure whose xiphoid prongs attest to penetrative insight. Although there is an ambiguity of form as to whether the figure is ahead or abstraction, the artist deftly the 'real' from artistic realism itself and places it within the abstract art domain, not of verisimilitude but of the idea. This would seem to be borne out in the fact that the building fragments in the background, through their spatial displacement and their golden hues, appear to shimmer in the distance like a mirage while the figure is almost of sculptural solidity but not the less indefinable for that.

Given Einstein's famous skepticism of religion, we could see the depicted buildings also as the representative of the perceived constraints of institutions, be they ecclesiastical or secular. In concert with this attitude is this present oil painting, as we see a paean to intellectual freedom embodied in the figure's pulsing life of fluidity and in the contrast between this and the ossified and crumbling background which pales in the light of the power of the human mind.