Oil Painting Reflecting The Opacity of an Oracle and His Lasting Impact
Do you consider
yourself
adventurous?
ART COMPASS Issue 28

This oil painting is far more abstract than figurative, to the point where what is obscure to the viewer. The artwork shows the phenomenon of Michel de Nostredame life's work as a seer and writer of Les Propheties.

There are subtle suggestions of the figurative in the stylised hat seen in many portraits of Nostradamus, but overwhelmingly Virtosu plays with the ideas of obscurity, openness and the equivocal in his aesthetic here.

Fittingly for his subject, the abstract art master has created a canvas of seeming sphinx-like impenetrability.
Just as Nostradamus's almanacs of alleged predictions of world-historical events are veiled in a highly allusive and poetic language of alternating dialects, susceptible to varying interpretations, Virtosu's figure in this abstract painting does not offer a transparent meaning.

Rather than being a portrait of a man or of his work, this abstract picture would seem to be a portrait of the lasting effect of both, as muted colors and tones purvey a general mood of foreboding. Within this mood there is a meticulous gradation of color, with reds climbing into black and browns; blues, greens, and darks all co-existing in equanimity under the saturnine tone. 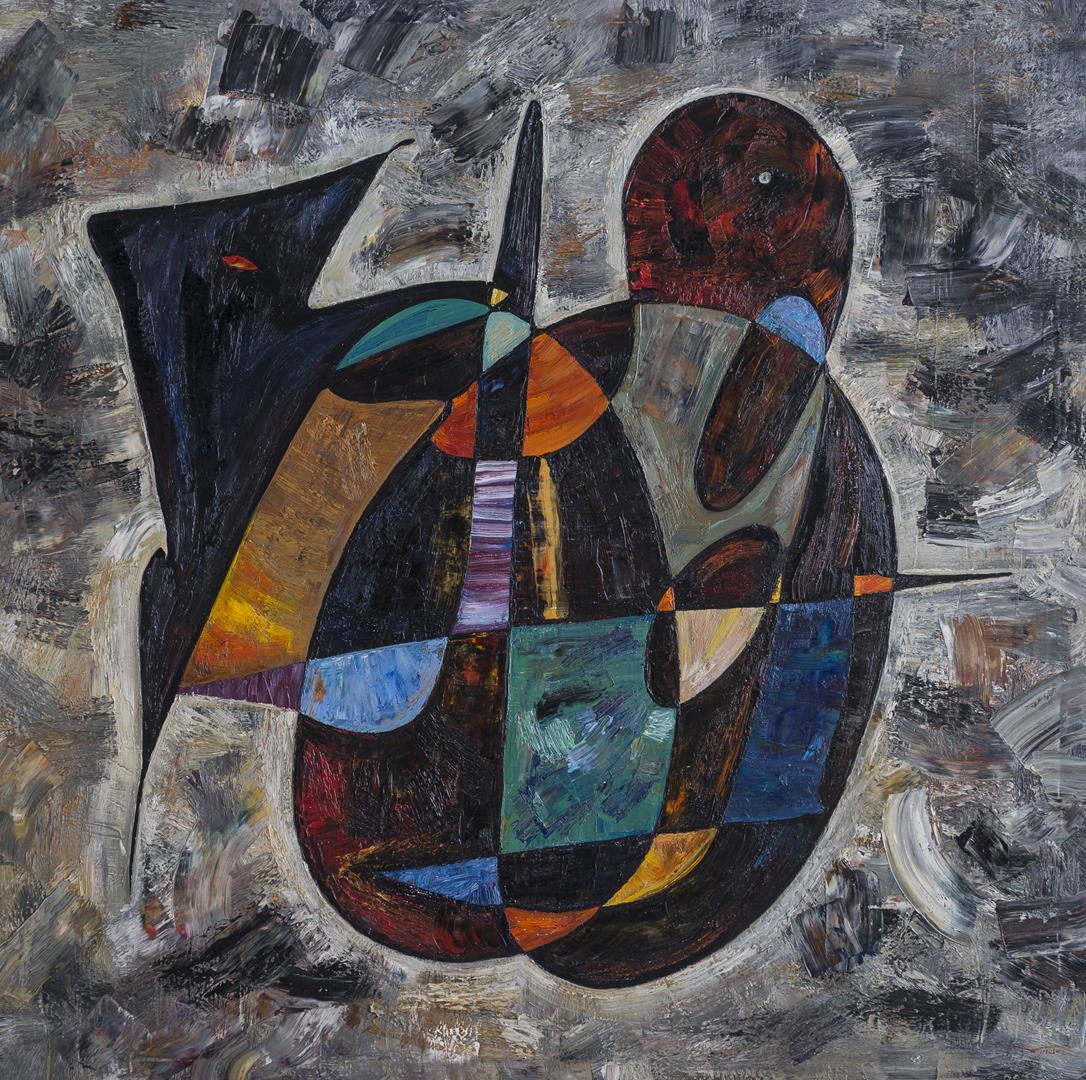 Yet this contemporary abstract artwork is as much about painting as it is about its subject-matter. Abstraction is liable to provoke questions about the epistemological status of art – how its claims to knowledge of the world can be made, given the disjuncture between the visible world and the mechanisms of the genre. In parallel to this and in view of the subject-matter here, the epistemological status of Nostradamus's 942 surviving quatrains is and has been for centuries hotly disputed. His poetic approach could be considered as equally removed from matter-of-fact prose as Gheorghe Virtosu 's abstraction is from figuration in this work.

In both cases, the meaning is something to be deciphered through the intellectual effort of the reader or viewer.
As the quatrains do not become for that less of a poetic or even perhaps a premonitory monument, the artist's figure has a solidity and real existence as visual artifact despite its lack of figurative referentiality. Further, even, the picture's abstraction lends the figure an independent existence, separated from the reliance of figuration upon its reference to the external world for signification.

Hence we see in Virtosu’s painting a creative 'epitome', or mirroring of the work of the man, by means of the aesthetic's internalization of the operations in that work on the part of the artist.

About author Shane Lewis was born 1962 in Dublin, UK. He studied at National College of Art and Design, Dublin. Educated in Ireland and the US. Lives in New York. Has also lived in UK. Modern Art. Contemporary Art. Build up collections, Institutions, Preservation, Research. E:This email address is being protected from spambots. You need JavaScript enabled to view it.
art criticism art review oil paintings abstract paintings existence origin and civilizations dark abstract art
Sing up to the Art
Weekly email