The Roadmap To Nowhere Oil Painting Reflection!
Do you consider
yourself
adventurous?
ART COMPASS Issue 28

Throughout history, the vision of art’s role has changed dramatically - from art as the representation of the transcendental side of life to being just an eye-pleaser. But after going through the trauma of two world wars in the 20th century, political art also became seen as an important platform for speaking up social position and discussing political matters. Drifting away from ‘art for art’s sake,’ contemporary painters regularly refer to the topical subjects, which comes as no surprise, considering the aggressively intensive flow of mass-media content.

George OrwellIn our age, there is no such thing as keeping out of politics. All issues are political issues, and politics itself is a mass of lies, evasions, folly, hatred, and schizophrenia.

In his 2000 Camp David Summit oil painting, Gheorghe Virtosu addresses one of the remarkable events in the recent history - a summit meeting of the United States president Bill Clinton, Israeli prime minister Ehud Barak and Palestinian Authority chairman Yasser Arafat, at the country retreat for the President of the US, Camp David, Maryland. It took place in 2000, being an attempt to end almost four decades of the Israeli–Palestinian conflict. Yet, the attempt occurred ineffective, because both sides couldn’t agree on the questions of permanent status, including the problems of borders, settlements, refugees, and Jerusalem. Actually, the result was even opposite, leading to the escalation of the violence and so-called Al-Aqsa Intifada. 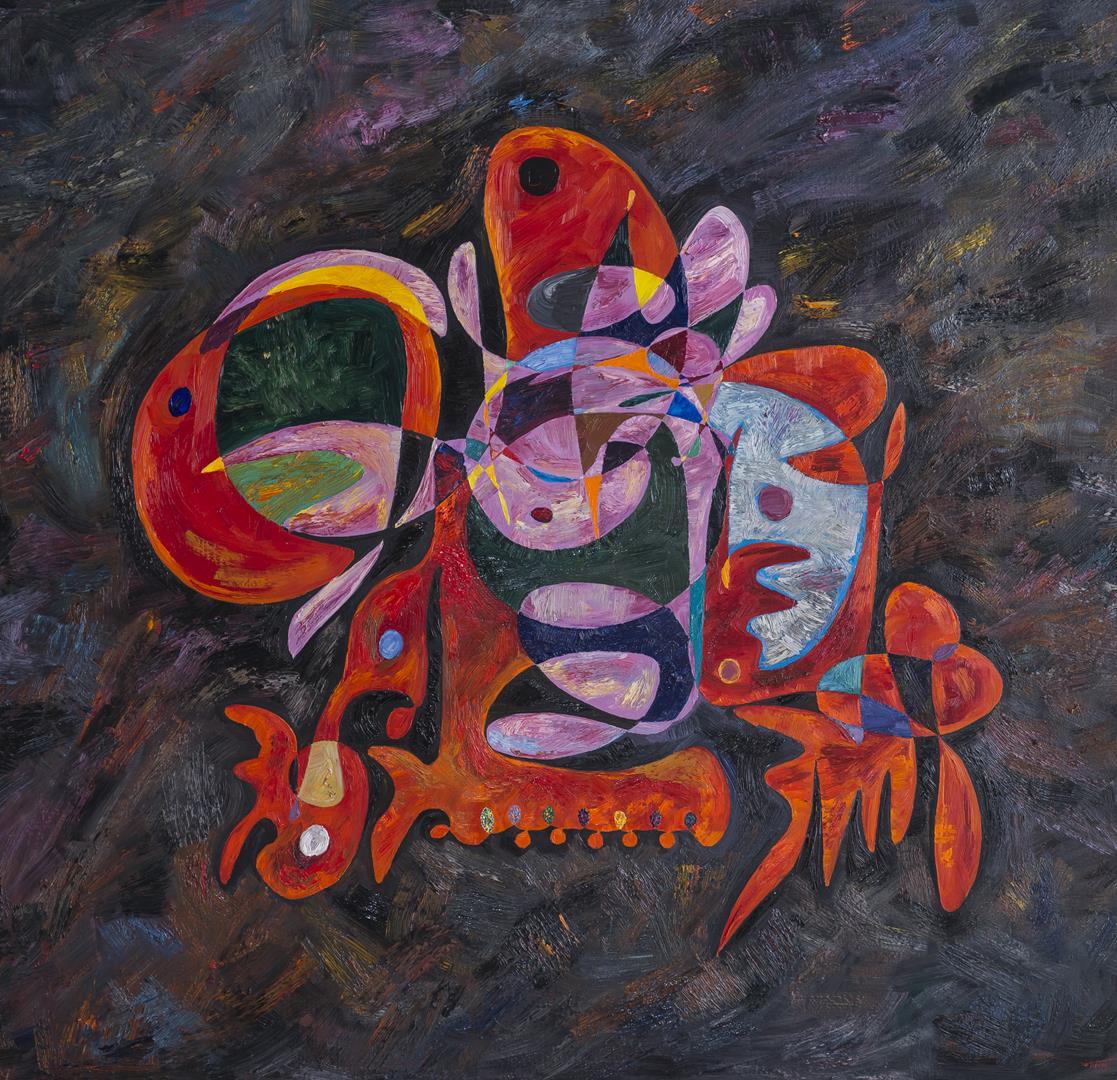 Talking about history using the language of non-figurative art seems to be almost impossible. History is always specific, whilst abstract painting avoids certainty, appealing not to facts, but emotions. Nevertheless, we are often mistaken, excluding feelings from history. All vicissitudes and achievements of the epochs affect not countries, not some ephemeral societies - it changes the lives of people.

Gheorghe Virtosu attempts to capture the emotional climate of the event - the mood of the failed expectations, anger, and disappointment.
Such ‘mixture’ is expressed in the complex coloring of the backdrop. It is made of dark blue, combined with the strokes of purple, red, orange, yellow, and light blue, which were applied in the coloring of figures as well. Those tints, clear and joyful themselves, evolve into a somber mass oil painting. The notes of conflict are supported with the drawing of the image, where roundish shapes are merged with some elongated, sharp fragments.

The composition of the oil painting is slightly off the balance: being mostly symmetric, it still has the number of ‘holes’ and ‘bulges’ that interrupt its integrity. They recall the images of animal-like creatures from the Mesoamerican painting, where snakes, jaguars, birds are entwined and devour each other in the everlasting fight. The whole visual construction of the oil painting looks like being torn from the inside and is about to burst - the exact feeling of the situation on the Near East. Unfortunately, we still experience it even today, 18 years after the Camp David Summit, when the problem still remains unsolved.

About author Alexandra Osadkova was born 1984 in Kiev, Ukraine. She studied at National Academy of Visual Arts and Architecture, Kiev. Educated in Ukraine and the US. Lives in Los Angeles. Modern Art. Contemporary Art. Exhibition Designer, Writer. E:This email address is being protected from spambots. You need JavaScript enabled to view it.
political art art criticism
Sing up to the Art
Weekly email