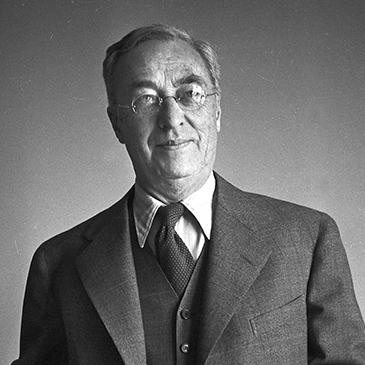 Russian-born Wassily Kandinsky founded abstract art in the late 19th and early 20th centuries. His distinctive perspective on the shape and function of art highlighted the synthesis of the visual and the auditory. He heard sounds as color, and this unusual perception was a guiding force in the evolution of his artistic style.

Born in Moscow in 1866, the artist did not seriously pursue his artistic career before age 30. He had studied law, economics, and ethnography at the University of Moscow, becoming a professor of law upon graduation. It was during his time at the college he reprised his childhood interest in art, and in particular, the symbolic character of color and its religious implications.

He experienced a type of epiphany upon seeing a Monet exhibit in Moscow. Initially put off by the artist's Impressionistic Haystacks paintings, Kandinsky found nevertheless that Monet's use of color impacted him in a significant manner, taking on an almost mythic power. During the same period, the artist attended a performance of Wagner's opera, "Lohengrin," which had a similarly strong effect on his sensibilities. It sparked a synesthetic experience where the notes that he heard became colors and visual images, a perception that could instruct his notions about art.

After only three decades of instruction, Kandinsky registered in a Munich art school to study with Anton Azbe, a Slovenian Realist whose forte was figure drawing. In Azbe's studio, Kandinsky worked beside fellow Russian Alexej von Jawlensky, a future Expressionist who familiar his new friend with the town's avant-garde society.

After two decades of tutelage, Kandinsky took a year to hone his craft before entering the Munich Academy to study with Franz von Stuck, a demanding traditionalist who had been the city's leading painter at the moment. The master's emphasis on Symbolism in his work, in addition to his focus on creativity, proved inspirational to his pupils.

Kandinsky and some of his colleagues founded an artists' group named Phalanx in 1901, a response to the restrictive status quo of the Munich art scene. In 1903, the artist painted his first landmark art, "Der Blaue Reiter" or The Blue Rider, an Impressionistic scene of a guy in a blue cape astride a white horse.

In this first decade of the 20th century, the artist developed a progressively innovative style that reflected the consequences of these schools as Fauvism, Pointillism and Expressionism. His characters became less distinct, his compositions progressively planar. In these 1908 pieces as "Munich-Schwabing with the Church of St. Ursula" and"Autumn Study Near Oberau," the interplay of color took precedence over traditional form. In 1909, Kandinsky was instrumental in founding Neue Kunstlervereinigung Munchen, or New Artists' Association of Munich, a group of radical artists whose daring strategy was far removed from the mainstream art of the age.

The artist's budding abstract design started to blossom in this period with functions that de-emphasized traditional boundaries like line and form, focusing rather on the communication of emotion through the juxtaposition of color. In 1910, Kandinsky finished an untitled watercolor that art experts consider to be his first truly abstract painting.

Like his Swiss buddy painter Paul Klee, Kandinsky was a gifted musician, and his abstract paintings are often described as 'painted music.' However, Kandinsky was determined that this wasn't correct. Similar to music, which does not have any concrete form but is a direct reflection of the composer's senses, Kandinsky's abstract art sought to remove the intermediary, objective world and depict his inner vision right on the canvas, expressed in terms of color and movement.

In 1911, the New Artists of Munich rejected one of Kandinsky's entrances for their exhibit. He reacted by establishing a rival exhibition for The Blue Riders, a new group he formed together with German painter Franz Marc and these Expressionists as Jawlensky, Auguste Mack, and Gabriele Munter. The team sponsored three displays and published "The Blue Rider Anthology" but dissolved in 1914 with the arrival of World War I.

Kandinsky's first publication exploring abstract art concept, "Concerning the Spiritual in Art," was published in 1910. In it, he explained the method behind what many critics of the time believed to be his insanity: his revolutionary approach to visual art. From the treatise, Kandinsky attempts to vanquish what he terms the nightmare of materialism in favor of educated spiritualism in artwork and makes a case for the similarity of audio and visual art concerning expression.

The artist used musical phrases such as "improvisation" and "composition" in the names of his pre-war paintings, highlighting the connection between the two art forms. The critical response of the mainstream art community to Kandinsky's first abstract attempts was uncharitable at best, and the artist knew it to gain approval for his work; he couldn't abruptly sever all connections to the convention.

Because of this, a few of the pieces he produced during the second decade of the 20th century kept a few recognizable items. By way of instance, Winter Landscape from 1909 contains the outline of a home and triangular trees while Sketch 160A from 1912 includes a stylized picture of a troika pulled by a trio of horses, which can be represented by three lines and three indistinct heads.

He also led the Moscow Museum for Pictorial Culture. In his art, he had been drawing ever nearer to complete abstraction. 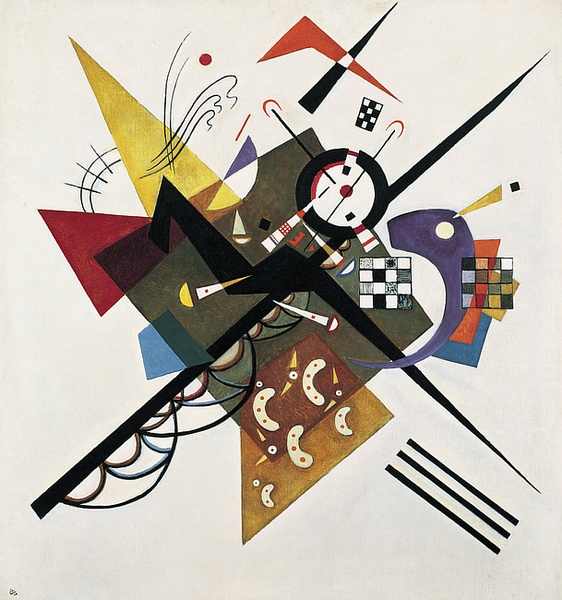 On White II, 1923Wassily Kandinsky artwork
"Color is the keyboard, the eyes are the harmonies, the soul is the piano with many strings. The artist is the hand that plays, touching one key or another, to cause vibrations in the soul." - Wassily Kandinsky

In 1922, Kandinsky started teaching at the Bauhaus school of applied art and architecture in Weimar, Germany. He published his second treatise on art theory the following year, entitled"Point to Art."

From the early 1930s, Germany was entirely under control by the Nazi Party, and Hitler was able to collect up to 16,000 avant-garde artworks which were initially in a screen in the temples of Germany. He also ordered to boat about 650 artworks to Munich in preparation for his art exhibition called Degenerate Art. Shortly Nazi regime shut down the Bauhaus school, and Kandinsky moved to Paris. One of his paintings of the time was"Development in Brown," a somber collage of rectangles and circles enclosing a vibrant banner of triangles. Historians draw a connection between the painting and the brown-uniformed Nazi soldiers that had been emerging throughout Germany in growing numbers.

In Paris, the artist incorporated the sense of order that divides the Bauhaus to his job with geometric figures and a much more outstanding compositional balance. His painting, Striped out of 1934, is a combination of balls and squares with dissecting lines. Horizontal from 1939 is a black and white color checkerboard with different geometric or free-form symbols in each square.

Two of his last masterworks, Composition IX from 1936 and Composition X from 1939, bring together the many elements of Kandinsky's vision and style in completely fresh ways. The piece Composition IX forms a backdrop of the bright coloring of supremely good swaths with various animated symbolics floating throughout the canvas. The masterpiece Composition X includes bright hue colored shapes onto a dark canvas background. The exceptional vibrancy of the various symbols communicates a joie de vivre absent from his early works like Composition VI and Yellow-Red-Blue.

"Color is the keyboard, the eyes are the harmonies, the soul is the piano with many strings. The artist is the hand that plays, touching one key or another, to cause vibrations in the soul." - Wassily Kandinsky

The same as Shakespeare on literature, and Freud on psychology, Wassily Kandinsky painting's effect on abstract art is enormous. Kandinsky's artistic output concerning quantity and consistent quality is phenomenal by any standards and matched by very few artists in any creation. Although like many artists, his paintings reveal an evident dissimilarity between the ancient and mature works. As his fellow artist Diego Rivera has indicated, Kandinsky's art isn't a manifestation of life. It's life itself.

The effect of Wassily Kandinsky's art concept and Wassily Kandinsky paintings during the artist's life was considerable, both by his collaboration with his colleagues in the many groups he founded and from the treatises he printed. His writings laid the groundwork for 20th-century moves like Abstract Expressionism. Later artists like Jackson Pollock would notify their unique vision with the tincture of Kandinsky's theories. Mark Rothko and his contemporaries at the Color Field college reprised Kandinsky's focus on the psychological power of color, and members of their Neo-Expressionist motion in the 1980s were subject to Kandinsky's influence also. Maybe more than any other master of the age, Wassily Kandinsky artwork forever changed the way both performers and the world at large will approach - and love - visual art.

"In great art, the spectator does feel a corresponding thrill in himself. Such harmony or even contrast of emotion cannot be superficial or worthless; indeed, the Stimmung of a picture can deepen and purify that of the spectator. Such works of art at least preserve the soul from coarseness; they "key it up," so to speak, to a certain height, as a tuning-key the strings of a musical instrument.

In each picture is a whole lifetime imprisoned, a whole lifetime of fears, doubts, hopes, and joys. Whither is this lifetime tending? What is the message of the competent artist? To harmonize the whole is the task of art.

The spiritual life, to which art belongs and of which she is one of the mightiest elements, is a complicated but definite and easily definable movement forwards and upwards. This movement is the movement of experience. It may take different forms, but it holds at bottom to the same inner thought and purpose."
Points, 1920Wassily Kandinsky artwork 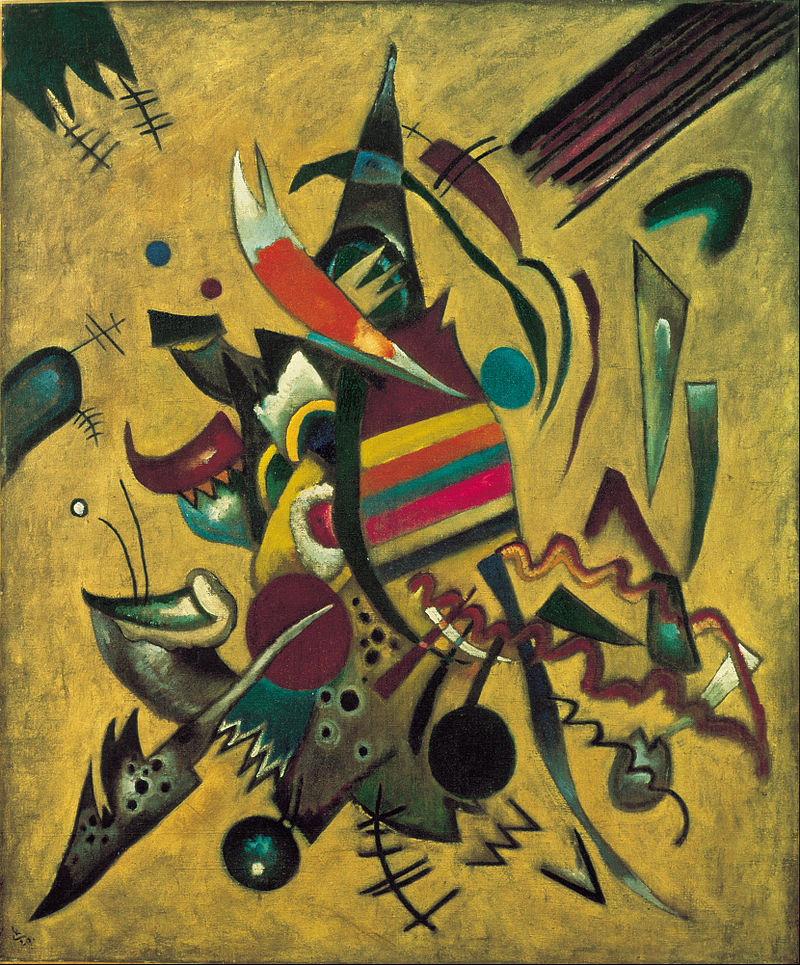