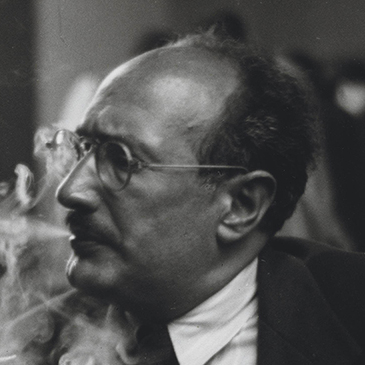 He left Yale prematurely and proceeded to New York. In 1925 he studied under Max Weber in the Art Students League. He participated in his first group exhibition in the Opportunity Galleries, New York, in 1928. During the early 1930s, Rothko became a close friend of Milton Avery and Adolph Gottlieb. His first solo show took place in the Portland Art Museum, Oregon, in 1933.

Rothko's first solo exhibition in New York was held at the Contemporary Arts Gallery in 1933. In 1935, together with William Baziotes, Gottlieb, along with many others, Rothko founded the Ten, a group of artists sympathetic to abstraction and expressionism that exhibited until 1940. He implemented easel paintings to the Works Progress Administration Federal Art Project from 1936 to 1937. By 1936 Rothko understood Barnett Newman. In the early 1940s, he worked closely with Gottlieb, creating a painting design with mythical content, simple flat shapes, and vision inspired by such primitive art. By mid-decade, his work integrated Surrealist techniques and graphics. In the fall of 1943, Rothko returned to New York. He met with collector and art dealer Peggy Guggenheim, but she was initially reluctant to take Mark Rothko artworks. Peggy Guggenheim gave Rothko a solo show at Art of This Century, New York, in 1945. 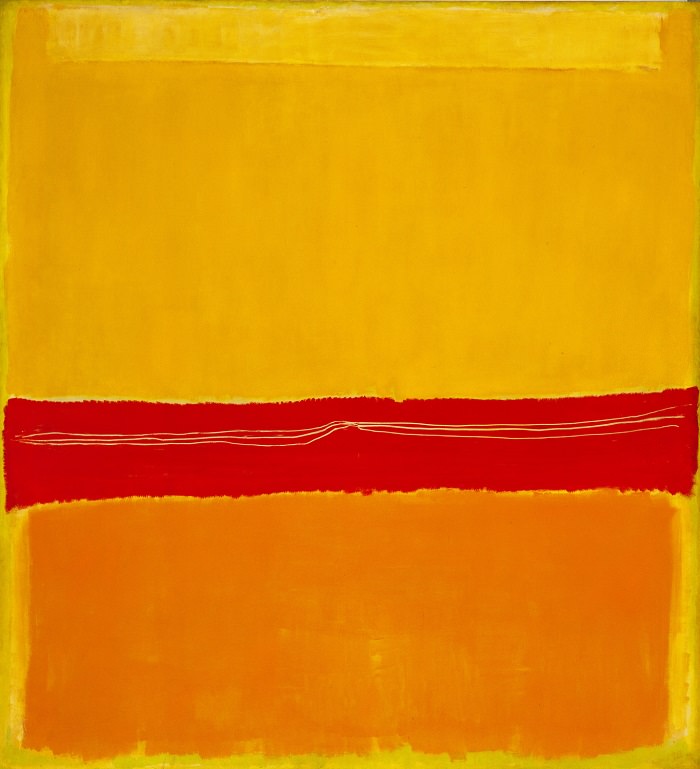 “A painting is not a picture of an experience, but is the experience.” - Mark Rothko
In 1947 and 1949 Rothko educated at the California School of Fine Arts, San Francisco, where Clyfford Still was a fellow teacher. With Baziotes, David Hare, and Robert Motherwell, Rothko founded the postsecondary faculty Subjects of the Artist, New York, in 1948. The late 1940s and early 1950s saw the development of Rothko's mature style, where frontal, luminous rectangles appear to hover on the canvas surface. In 1958 the artist started his first commission, monumental paintings to the Four Seasons Restaurant, New York. He finished murals for Harvard University, Cambridge, Massachusetts, in 1962 and in 1964 accepted a mural commission for an interdenominational chapel in Houston. Rothko committed suicide on February 25, 1970, in his New York studio. A year after the Rothko Chapel in Houston was committed, and in 1978, the Guggenheim Museum organized a major retrospective.
“I'm not an abstractionist. I'm not interested in the relationship of color or form or anything else. I'm interested only in expressing basic human emotions: tragedy, ecstasy, doom, and so on.” ― Mark Rothko

Mark Rothko wrote several philosophical statements that would continue to guide his art for years to come. "I favor in my work the simple expression of the complex thought. I am for the large shape because it has the impact of the unequivocal and the wish to reassert the picture plane. I am an adept of flat forms because they destroy illusion and reveal the truth."

The scale and surface of several paintings reflect these ideas. Mark Rothko abandoned the traditional Renaissance three-point perspective, which conceives of the canvas as a window onto another world. Dark varying opacity pigments make the picture's surface feel flat, yet it quivers and vibrates, offering a feel of atmospheric depth. Mark intended these compositional strategies to invite the viewer emotional and visual contemplation, creating the state for reflection and silence.

Rothko once said, "Often, towards late evening, there's a feel of mistery in the air, frustration, threat - sort of all of these at once. I want my paintings to have the quality of such moments."

"A picture lives by companionship, expanding and quickening in the eyes of the sensitive observer. It dies by the same token. It is therefore risky to send it out into the world. How often it must be impaired by the eyes of the unfeeling and the cruelty of the impotent.

Art is such an action. It is a kindred form of action to idealism. They are both expressions of the same drive, and the man who fails to fulfill this urge in one form or another is as guilty of escapism as the one who fails to occupy himself with the satisfaction of bodily needs. In fact, the man who spends his entire life turning the wheels of industry so that he has neither time nor energy to occupy himself with any other needs of his human organism is by far a greater escapist than the one who developed his art. For the man who develops his art does make adjustments to his physical needs. He understands that man must have bread to live, while the other cannot understand that you cannot live by bread alone."

No.61 Rust And BlueMark Rothko paintings 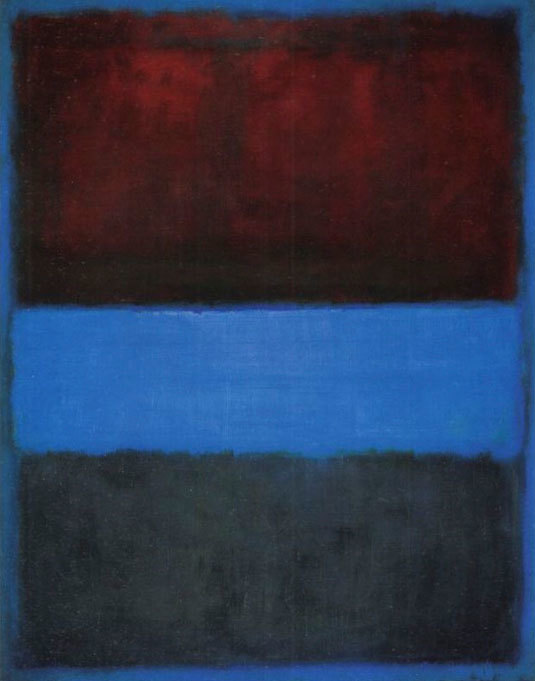