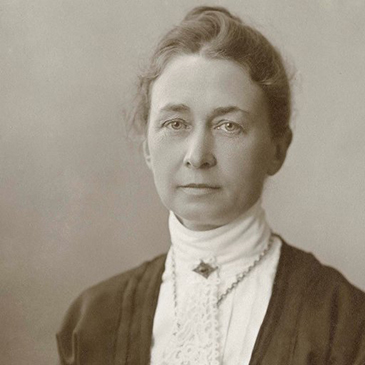 Hilma Af Klint belonged to one of the first generations of females to get higher education at the Royal Academy of Fine Arts (Kungl. She was accepted into the Royal Academy of Fine Arts at the age of twenty. Through the years 1882-1887 she studied there. She was mainly drawing portrait, and landscapes. Klint graduated with honours and has been awarded a scholarship in the form of a studio at the so-called "Atelier Building" (Ateljébyggnaden), owned by The Academy of Fine Arts. This was the primary cultural hub in the Swedish capital. The same building also held Blanche Café and Blanche Art Gallery, in which the battle stood between the traditional art view of the Academy of Fine Arts, along with the resistance movement of the Art Society (Konstnärsförbundet), inspired by the French En Plein Air painters.

Hilma worked in this studio before 1908, when she had to move to be able to look after her blind mother. She would dutifully control her freedom and liberty through several years to aid her sick mother. In her childhood, Klint is thought to have had a romantic affair with a certain Dr Helleday, but as this did not lead to anything, she chose to remain unmarried all her life. In 1917 Klint inaugurated her new studio in Munsö, near Adelsö, an island in the lake Mälaren not far from Stockholm, where the family had a mansion. Following her mother had passed away in 1920, she transferred to Helsingborg in the South of Sweden. Nine decades later, when she had been more than 80 years old, Klint moved back up to Stockholm, where she remained at the home of her cousin, Hedvig Af Klint at Ösby, Djursholm.

Hilma Af Klint died in the fall of 1944, at almost 82 years old, after a traffic accident.

Like many of her contemporaries in the turn of the last century, Klint was in search of spiritual insight. As a teenager, she engaged in spiritistic séances but gave them up for their lack of seriousness. In her thirties, Klint was a part of the Edelweiss Society for a brief while. The Rosicrucian Order also constituted a significant source of inspiration for her. Most importantly, Klint was heavily involved with the Theosophical Society, where she was a member from the very beginning in Sweden in 1889. In her sixties, she became interested in anthroposophy.

In 1896 Klint and four other like-minded female artists left the Edelweiss Society and founded the"Friday Group", also known as "The Five". They met every Friday for religious meetings, which began with prayers, studies of the New Testament and meditation, followed by religious séances. The moderate exercised automatic writings and mediumistic drawings. In 1896, the five girls began taking meticulous notes of the mediumistic messages which the spirits conveyed to them. With time, Klint felt chosen for the more important messages. Following ten years of esoteric training within the framework of "The Five", and at age 43, Af Klint accepted to conduct an important mission, the"Paintings for the Temple". This commission, where she would be engaged between 1906 and 1915, would alter the course of her life. 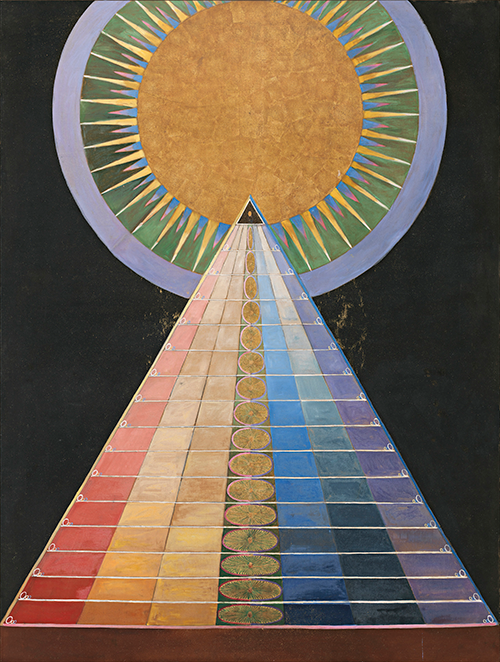 Group X, No. 1, Altarpiece, 1915Hilma af Klint paintings for the future
The collection by Hilma “Paintings for the Temple” encompasses 193 paintings, subdivided into several series and sub-groups. It is one of the very first pieces of abstract art in the Western world, as it predates with several years the first non-figurative compositions of her contemporaries in Europe.

Klint shared a fascination with the spiritual with another modern pioneers in abstract art: Wassily Kandinsky, Kazimir Malevich, Piet Mondrian, and František Kupka among others. All of them wanted to surpass the constraints of the physical world. Unsurprisingly, many were attracted to Theosophy, as its ideas suggested an attractive alternative to the exact static principles of academic art. The abstract, non-figurative artwork opened up a radically new way of expression. As opposed to depicting a mere visual impression, they aimed at finding a new route, reaching for a spiritual reality. Every one of them found his, or her, own private way into abstract painting.

There's not any proof that Klint was involved from the abstract motion of her modern male colleagues, nor that she engaged in the creation of early Modernism in Central and Western Europe. Nevertheless, she devised a similar, non-representational aesthetics. The contact with spiritual guides, who inspired her and communicated with her, was for Klint as real as the impressions given by the five physical senses. By visualizing inner experiences and processes, and by describing those as concretely and precisely as possible, she proceeded to develop very personal expression.

Hilma was convinced that fact isn't restricted to the mere physical world; she was convinced that in parallel with the material world lies an internal one and that the contents of the interior dimensions are just as real and true as are those of the outer one. To communicate this message, Hilma made use of symbols, words and letters. By way of employing dualistic symbols, Klint expressed that "Everything is Unity".

When Klint passed away in the fall of 1944, she left around 1300 non-figurative paintings which had never been proven to outsiders, and over 125 notebooks and sketchbooks. In her will, Hilma Af Klint specified that her life's work ought to be kept secret for at least 20 years after her death. Her last wish was also the collection should not be split up.

"The pictures were painted directly through me, without any preliminary drawings, and with great force. I had no idea what the paintings were supposed to depict; nevertheless I worked swiftly and surely, without changing a single brush stroke."
Group X, No. 2, Altarpiece, 1915Hilma af Klint paintings for the future 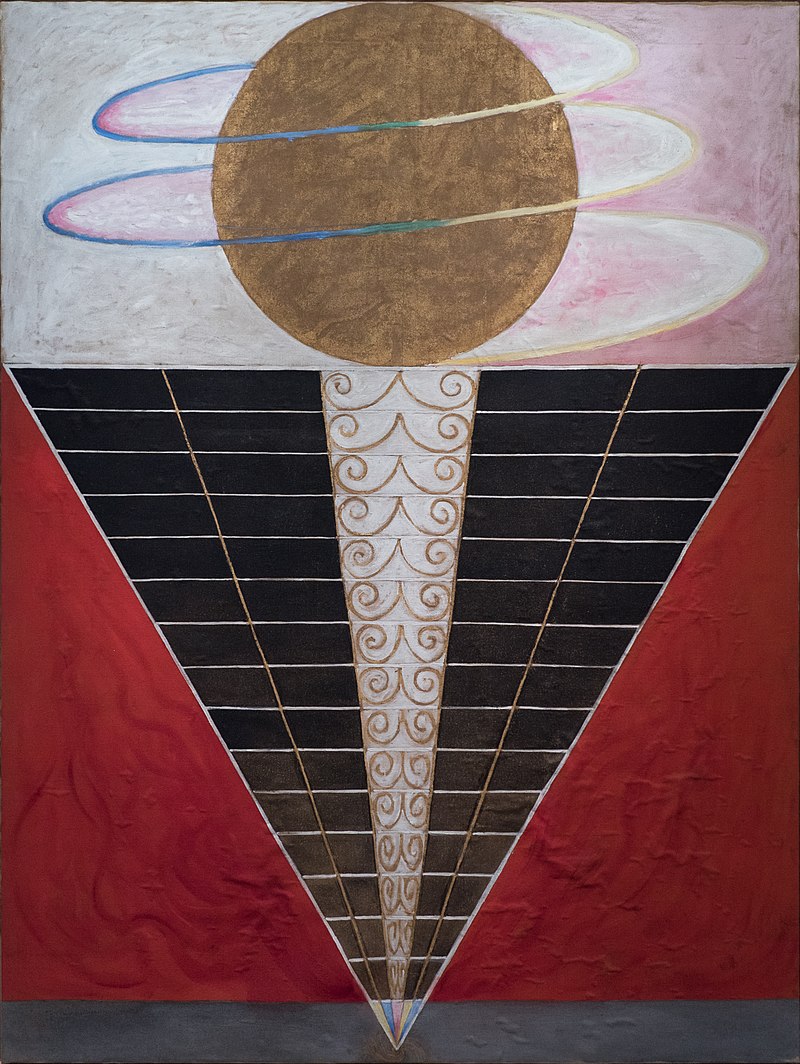